Fake Jets jerseys seized. Should the whiteout be part of this new tradition? Jets return a missing piece. CBC veteran reporter Scott Oake is back in the city. Winnipeg ready to party like its 1994. Jets old logo will live on or will it? Blake Wheeler looks to make gains. David Aebischer does enough to earn deal. Another look at Teemu Selanne’s NHL longevity.

Winnipeg Free Press:  Fake Jets jerseys seized.  Once again, the RCMP does a nice job stopping the flooding of the market with fakes.

Globe and Mail:  Get ready for a lot of Winnipeg Jets coverage.  The coverage of the Jets is going to be non-stop, and there is no better place to get all your coverage than right here at Illegalcurve.com.  From the Press Box to the Ice to the radio mic’s, we cover everything Winnipeg Jets hockey.

Winnipeg Free Press:  History in the making.  I think it is a fair expectation that at least 1/2 the arena will be wearing white.  I’m not saying that those who bought the new jersey shouldn’t wear it.  My preference would be to see the entire crowd in some sort of uniform Jets wear.  But if not at least it would be nice to see fans dressed in some form of Jets gear, whether that is a white Teemu Selanne jersey or a shiny new Andrew Ladd polar night blue.

Winnipeg Free Press:  Just like the Jets, Oake’s back.  Count me as a big fan of the CBC veteran broadcaster (and Pegger) returning to our fair city.

Metro:  Winnipeg ready to party like its 1994.  My video game of reference is NHL 1996 (for the SNES), which I believe was the last year the Jets were in the game (not as a “alternate jersey for the Yotes).  The truth is that fans aren’t even aware how insane the partying is going to be this weekend.  Thankfully Monday is a holiday, because you are going to need the recovery time.

Winnipeg Sun:  As Jets close in on opening-day roster, Stapleton injured.  Jets need to get down to the magic number by this afternoon.  Stay tuned to @illegalcurve on twitter and here on IC for all the latest roster news.

National Post:  Jets return a missing piece.  While the city has thrived in the years since the departure of the Jets, the return is the missing piece of the puzzle in our city’s return to the national spotlight.

Winnipeg Sun:  Jets Wheeler looks to make gains.  Time for him to take the next step in his development if he wants to be a big, power forward. 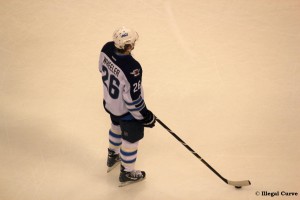 Winnipeg Free Press:  Roster spot secured.  Meech won’t be satisfied just being the last defenceman for this team.  Expect him to push hard to get in the lineup.

Winnipeg Sun:  Aebischer does enough to earn deal.  This is a very strong move for the IceCaps as it gives them a very solid tender, who still feels like he has something to prove and hopefully this determination will result in strong play for the Jets AHL affiliate.

Winnipeg Free Press:  Jets training camp report.  Sounds like everyone is going to be quite excited to have this uncertainly come to an end.  It isn’t just the fans who are eager for the regular season to get underway.

Los Angeles Times:  Another look at Teemu Selanne’s NHL longevity.  Once he demolished Mike Bossy’s rookie goal scoring record there was no looking back for the Finnish Flash.