Winnipeg Free Press:  Jets book launches tonight.  Count me as someone who is excited to read Randy Turner’s book. 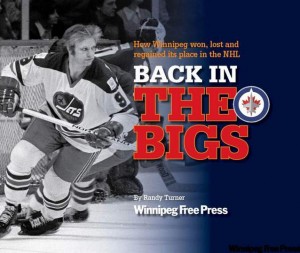 Ticket News:  Ticket brokers hopeful about NHL ticket sales this season.  This is an interesting stat:

The Jets return to Winnipeg after a 15-year absence has made their tickets a hot commodity and boosted the team’s average ticket price to $176.55, second in the league only to the Toronto Maple Leafs, according to SeatGeek.com.

The Manitoban:  U of M gets in on Jets excitement.  As someone who used to use the Elizabeth Dafoe Library as a place to sleep, it’s a shame they didn’t have this when I was in school.  If you want a chance to check out the display, head on down to the U of M.

Daily Journal:  As NHL season approaches, Atlanta remembers the Thrashers and settles for minor league hockey.  Important to be empathetic of the fans who had their team ripped from them.  As Chris Mason said on the Illegal Curve Radio show before the team moved, those fans who did support the team were quite passionate about the sport.

The Sports Riot:  Top 5 NHL jerseys of all time.  With the exception of the Canucks, I love this list.  And while I’m biased towards the Jets, I absolutely loved the old Colorado Rockies jersey.