Note: On today’s Illegal Curve Hockey Show on TSN 1290 Winnipeg, we will have non-stop hockey coverage from noon to 3 pm. Show topics include breaking down the Jets 4-3 SO win over the Blues, previewing the Jets and Predators game which takes place tomorrow night and talking about all things NHL. Guests: Joshua Cooper (The Tennessean).  Chuck Gormley (CSN Washington). 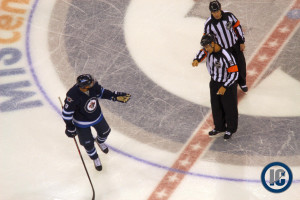 Winnipeg Free Press:  Trouba OK after scary crash into boards.  I have never witnessed anything at a live event quite like that and it was easily the quietest I have ever heard inside the MTS Centre yesterday.  Everyone was quite happy to read Jacob’s joking tweet well after the incident took place.

Winnipeg Free Press:  Jets finally find clear skies.  Before anyone goes planning a Stanley Cup parade it is important to mention that these Blues had played in Chicago less than 24 hours previous.  At the same time, it was impressive to come back from a two goal deficit, rather than meekly accepting their fate.

Winnipeg Free Press:  Jets fans sticking fast with pins.  I recall a pin craze during the 1999 Pan Am Games which were held here in Winnipeg.  In this instance fans love to collect anything that is connected with the Jets.

Winnipeg Sun:  Snapshots – Kane provides the spark.  The FU attitude was all the talk pre-game and Kane brought it into the contest as well.  Paul also covers the Kane penalty troubles and subsequent benching, the injury to Trouba and the continued line juggling by coach Noel.

Winnipeg Sun:  Scary moments for Jets, Trouba.  You could see the concern on the faces of every player on that Jets bench (as well as the Blues bench for that matter) in addition to the 15,004 fans inside the MTS Centre who quietly waited for any sign that the rookie would be alright.  His wave as he was escorted off the ice, had the entire MTS Centre erupting in cheers.

Illegal Curve:  Jacob Trouba leaves ice on a stretcher.  It was a terrible thing to witness but it was also rewarding to see the brotherhood of hockey players extend past the respective jerseys players wore.  From Blues Steen/Paajarvi waiting to skate the stretcher to Trouba to the reaction of the 15,004 fans we have it documented.  (Post features pictures). 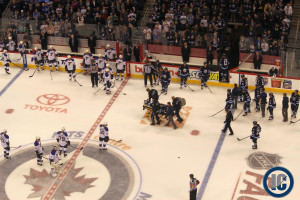 TSN:  Tough decisions pay off for Noel, Jets.  The buzz began just before puck drop when coach Noel tweaked his lines to scratch Tangradi and Setoguchi in favour of Peluso and Cormier.

CBC:  IceCaps support breast cancer awareness.  Always a good thing when organizations help to raise funds and awareness in the fight against cancer.

The Telegram:  ‘We don’t give up’ says coach McCambridge.  The St. John’s coach gives an assessment of his squad prior to action against Hershey.

Jets on a Deadline – Jets 4 Blues 3 in shootout: 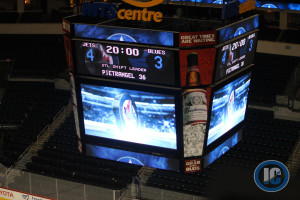 Post-game podcast from the Press box. Host Michael Remis and Analyst Richard Pollock break down the Jets play against the Blues.