Jacob Trouba speaks to the media the day after he suffered a bad fall on the ice. 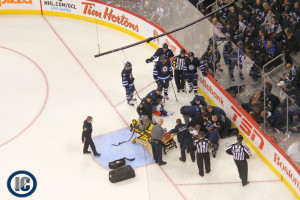 Following his horrific fall into the boards during the 2nd period, the full extent of his injury was unknown.  Thankfully he was released from the hospital and even joked about the taste of the boards via twitter.

Today he was at the IcePlex in a neck brace and met with the media to discuss the injury he sustained.