Winnipeg Free Press:  Many bright spots in loss.  You never like to lose the game but the coach and captain both saw some good things as the Jets continue to progress through the pre-season.

Winnipeg Free Press:  Hopefuls hanging in there.  They are doing exactly what they were brought into camp to achieve which is to make it difficult for the Jets brass to let them go.

Winnipeg Free Press:  Jets go down 4-3, but not without a fight.  Team showed some resiliency being down 2-0 to a stingy Wild team and managing to take a 3-2 lead.  Sounds like Pavelec had a strong game. 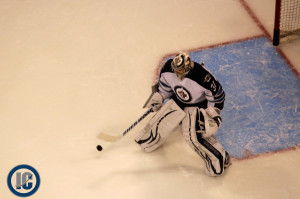 Winnipeg Sun:  Jets fall 4-3 in shootout to Wild.  Ken breaks down the game from St. Paul.

Coach Noel post-game audio – What did he think of the response by his group?  Guys battling for spots showing urgency.  Wanting to have tough decisions in terms of cutting team down to final roster.  Power play gave an emotional jump.  Byfuglien alright?  Thoughts on Pavelec.  Sticking to the plan (not panicking).  Did he notice the rivalry (noticed Winnipeg fans).