Following the loss to the Minnesota Wild last night, there were two groups of Jets on the ice this morning.

Following the loss to the Minnesota Wild last night, there were two groups of Jets on the ice this morning. 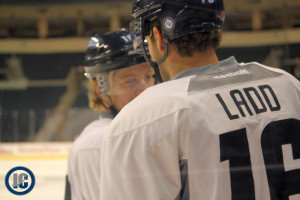 Adam Lowry – Getting to play tomorrow night.  What has camp been like not being able to fully participate?  Is there still time to make a good impression?  What does he notice from up in the press box?  Advice he has received from his dad.  Any players help him while he was injured?  Best advice he’s gotten from Thorburn.


Paul Postma – His thoughts on the game last night.  How did he feel personally?  Rivalry between Jets and Wild.  Did he notice the fans in the crowd (especially during ‘True North’ of anthem).  Is he liking his game and the competition in camp right now?  More on his game.  His goals out of pre-season.  Power-play talk.


Eric O’Dell – Overall, how did he feel about the effort?  Evolution of his game.


Jacob Trouba – His thoughts on the team’s effort last night.  Young guns on the PP.  Does it help his confidence?  How does he feel his game is progressing?