Winnipeg Free Press:  Buff, Enstrom paired at practice.  Will we or won’t we see this duo reunited for the regular season?  Do you like what they bring to the table together or would you prefer to see them split up?

Winnipeg Free Press:  Hustlechuk’s got game.  He works hard on and off the ice and that sort of attitude is just what the Jets need to bring game after game. 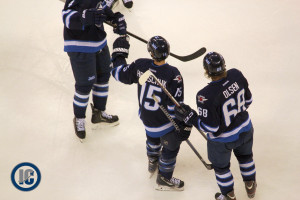 Winnipeg Free Press:  Youth served by roster moves.  Plenty of chances for the remaining prospects to continue to make a case for themselves.

Winnipeg Free Press:  No time for regrets.  You cannot dwell on the loss.  Of course you need to try and understand the mistakes that were made so you can avoid them in the future, but no point in beating yourself up over it.

Winnipeg Sun:  Hopeful Andrew Gordon has a special connection to Winnipeg.  Interesting to read about his connection to Teemu and the city.  Until he is fully healthy, what he can bring to the table, is yet to be determined.

Winnipeg Sun:  Players not happy about Wild hit on Mark Scheifele.  Hockey players have long memories, so while there may not be any direct reprisals for the dirty play, you can bet that this will be addressed in some further fashion. 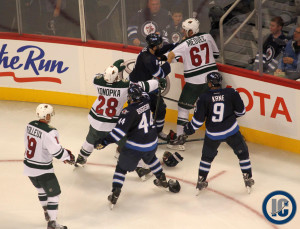 Winnipeg Sun:  Roster trimmed to 37.  Ken breaks down some of the moves and takes a look at some of the players the Jets have left on the roster.

Illegal Curve:  Coach Noel audio from MTS Centre.  Update on injured players.  Re-assigned 11 players.  Getting Adam Lowry into an exhibition game.  Has Josh Morrissey earned himself more time with the club?  Did Ian White not show enough?  Will Morrissey play another game?  Importance of moving forward.  What are they going to focus on?  The play of Matt Halishchuk.  What does he know about Andrew Gordon.  Defensive pairings.  What did he miss most with Jim Slater out of the lineup last year?  Still need clearance for Thorburn and Lowry?

Minneapolis Star-Tribune:  Wild top line/defense unit to debut vs. Winnipeg.  Unlike on Thursday, coach Yeo will be trotting out his top players for the game tonight.  He will also be playing #1 netminder Niklas Backstrom, which the Wild confirmed yesterday.