Note: Make sure to @ tweet @illegalcurve with your guess in our contests. During tonight’s game you can win IC Gear by participating in our twitter #IC5050 and #ICGWG contests. Remember that for your vote to qualify you must send in your guess by hashtaging (#) our 50/50 contest and/or the Game Winning Goal (GWG) contest. (i.e. #IC5050 $27,570 and/or #ICGWG Slater).

Note II: The game against the Minnesota Wild will be featured on TSN TV (Reminder that you need to call your service provider and re-order the channel) and anyone can listen to the call on TSN 1290 Winnipeg.  Game time is 7:00 pm cst.

Note III: Reminder that following the Jets game, our comprehensive coverage jumps into action with post-game audio from both dressing rooms, coach Noel’s post-game presser as well as our podcast from the press box breaking down the game action.

Winnipeg Free Press:  Chipman shows faith in GM with two-year extension.  It was hailed as an unusual move in the sports world but obviously Mark Chipman and company liked what they have seen so far in their GM. 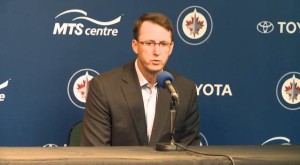 Winnipeg Free Press:  Ladd noticing youth influx.  The cupboard is definitely fuller with prospects than it had been previously and with names like Scheifele, Trouba and Lowry knocking at the door, fans are about to see the fruits of the last couple of drafts.

Winnipeg Free Press:  On the BUBBLE.  Year after year the guys on the fringe battle for the chance to get a taste of the NHL.  Might we see someone breakthrough this season?

Winnipeg Sun:  Cheveldayoff has Jets on right track says Mark Chipman.  While some view the timing of this extension as curious, the core group (Ladd, Wheeler, Bogosian, Enstrom, Kane, Little, etc) are Cheveldayoff signings and we are going to see the vision of the Jets GM as they develop along with the prospects that he has been drafting the past three years.  Mark Chipman spoke yesterday about True North being a group prepared to stick to a long term vision and it appears that Cheveldayoff followed this blue print sufficiently to earn a two year extension.

Winnipeg Sun:  D-men drawing blue-line in the sand, aim to get tougher in own zone.  While you cannot simply point to a number and say this sufficiently explains all aspects of the games, the cold truth is that the Jets (as a team) need to improve in their own end.  This starts with Ondrej Pavelec but it spreads to the D-pairings and the forwards being properly responsible in their own end.  If the team, as a whole, can make a better commitment to defence, this team will be battling in the West for a playoff spot. 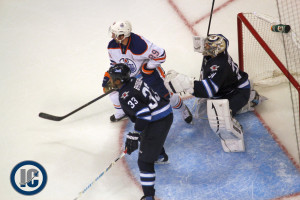 Winnipeg Sun:  Enstrom moving on after attack.  No point in worrying about something you have no control over.  Best to move on and focus on something positive.

Winnipeg Sun:  Players give thumbs up to GM Kevin Cheveldayoff’s contract extension.  Many of the players have had the pleasure of negotiating directly with Kevin Cheveldayoff so they have a reason to appreciate his work.

NHL.com:  Jets look for offense from rebuilt second line.  A late addition to the papers yesterday so for those who may have missed it, Patrick attempts to take a look at the biggest question mark that the Jets face as they enter the 2013-14 season.

Illegal Curve:  Pressing questions for the upcoming season.  Ezra (@ICezzyG) was asked five questions (1. Putting faith in youth. 2. Noel’s last chance?  3. Expectations for Scheifele & Trouba.  4.  Does realignment help or hurt playoff chances?  5.  What needs to happen to make playoffs?) for the Predators blog Smashville 24/7 regarding your Jets this season.

Minnesota Wild site:  Wild bringing 22 players t0 Winnipeg.  Getting a chance to see the Jets closest geographic rival up close and personal as they make the short trip to the Peg’ following a skate in Minnesota today.