Note II:  The Jets prospects play their last game today against the Canucks prospects at 2 pm cst.  It appears that the game is not available for streaming on the Jets site but you may be able to watch via the Canucks Young Stars page.

Winnipeg Free Press:  Byfuglien at practice, looking in better condition.  Hopefully this puts to rest all the speculation and chatter that has gone on during the course of the summer.

Jets official site:  MTS Centre Ice install 2013.  Check out this picture gallery as the logo and accompanying lines are added at the arena.

Winnipeg Free Press:  Sutter looking to rebound.  Along with the pedigree of his last name come expectations and to date it seems he has yet to fulfill these.  He is looking to improve and prove those doubters wrong.

Winnipeg Free Press:  Vincent taking over power play from Pearn.  Considering how woeful the Jets PP was last season, this could be the necessary kick start it needs. 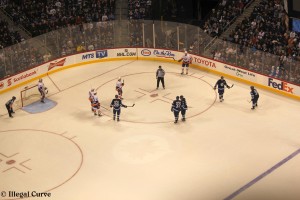 Winnipeg Jets official site:  Exclusive interview with Director of Player Development Jimmy Roy (Video).  Talking about the Young Stars Tournament.  His initial thoughts on the players he’s got at the tournament.  Discussion about Kichton and Lipon.  His thought on the development/progress of Scheifele and Trouba.  Addition of Mike Keane to the organization.