Winnipeg Free Press:  He’s TNT, dynamite.  When Petan fell to the Jets in the 2nd Round of the 2013 NHL Entry Draft they were overjoyed to be able to select the highly talented, albeit smaller centre.  So far he is showing that they made a smart decision as his skill is quite clearly evident to those who have watched him play.

Winnipeg Free Press:  Young Jets drill Oilers 7-2.  It isn’t quite payback for all those years of Smythe Division defeat back in the days of the Jets 1.0.  However, fans in Winnipeg are always excited to see the Oilers defeated, even if it is just a prospects game.  While it is early to get overly excited, again we are seeing some nice depth in the organization and Jets brass have to be happy that Eric Comrie stood tall in net. 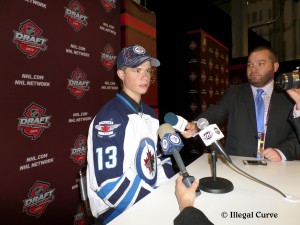 NHL.com:  Prospects Scheifele, Trouba aim to make team.  Which should come as no surprise to anyone who follows this team.