Winnipeg Free Press:  Wheeler happy with deal.  Fans will be happy to read the comments from the rangy winger about the future of this team and his reasons for wanting to be a part of this development.

Winnipeg Sun:  Wheeler signs on dotted line, gets hefty raise.  While some feel this is market value and others think it could be an overpay, the truth is we won’t truly know the value of this contract for quite some time.  Hard to be an absolutist one way or the other with that type of uncertainty.  It will be on the Minnesota native to prove that the Jets made a wise long term investment.

Winnipeg Sun:  Jets are where Blake Wheeler wants to be.  He feels that the pressure will serve him well as he doesn’t believe the long term contract will make him complacent. 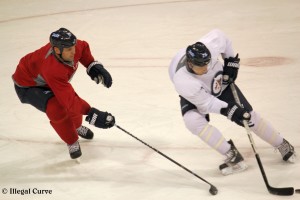 Winnipeg Sun:  Olympic training camp invite has Jets’ Wheeler pumped.  He liked the big ice while playing in Germany, so perhaps this will translate if he gets the opportunity to play for Team USA.

Illegal Curve:  Blake Wheeler conference call.  Listen to Blake Wheeler talk about his new six year deal which was announced late on Friday night as well as discussing his thoughts on the future of this team.

Illegal Curve: MFIVE Sports agent Anton Thun talks about his client Bryan Little.  Interesting to hear from Little’s agent who talks about his player’s intentions and a bit about the process of arbitration.