With the Jets’ arbitration dates for Little, Wheeler, and Bogosian rapidly approaching, we will conduct mock arbitration hearings for all three players (Illegal Curve: Mock Arbitration Edition). Additionally, we will discuss the Jets signing Paul Postma and Eric Tangradi, break-down the Jets schedule and cover the rest of the news from the NHL.

Illegal Curve:  Download the entire Winnipeg Jets 2013-14 schedule.  Be sure to vote in our newest Illegal Curve poll which asks which home game you are most looking forward to watching.  We’ve isolated some of the highlights for the upcoming season.  Ezra and I will break down our top 10 games next week.

On the Forecheck: NHL Travel Miles – Super Schedule.  Dirk breaks down the distance each team will have to travel.  Unsurprisingly the Jets distance will increase as they head to the expansive Western Conference but not in a significant fashion.

Winnipeg Jets:  Josh’s journal.  The Jets 2013 1st round selection signs off after an exciting week in Winnipeg.

Winnipeg Free Press:  Doing deals priority No. 1.  Always nice to add complimentary pieces but now is the time to put away the platitudes used with the media, roll up those sleeves and get the heavy lifters signed.

Winnipeg Free Press:  Jets get heavy homestretch to start.  Once again the Jets will be starting a totally unique season for fans as they jump to the Western Conference.

Winnipeg Sun:  Payroll on rise.  Considering that the Jets still have Bogosian, Wheeler and Little to sign you can expect to see a pretty sizable increase relatively soon.  At least we think it will be soon.

Winnipeg Sun:  Trouba has busy summer ahead.  We know where Jets fans want to see him next season but the question is will his development be best served in Winnipeg or in St. John’s? 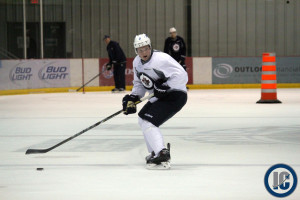 Winnipeg Sun:  Morrisey wins over doubters.  The poll that was live on our site since the draft has been overwhelmingly positive about the selection of Morrissey and based on what he has done this week Jets nation is can be excited what is next for the young prospect.

NHL.com:  Jets could turn to Scheifele, Trouba to fill lineup gaps.  Patrick gives a good assessment of the week that was and a look ahead at some of the holes the team will have to fill before next season.

Illegal Curve:  GM Kevin Cheveldayoff concludes Development Camp.  Initial thoughts on the Development Camp.  More about off ice development than on ice?  Jets depth at goalie.  What did he see from Josh Morrissey?  Getting Postma signed.  Opportunity for Postma.  Blake Wheeler tweet.  Concern about the Arbitration process.  Salary cap concerns.  What does Adam Pardy bring to the organization?  How has Zach Redmond’s summer been going?  Burmistrov question.  What does Matt Halischuk bring?  Thoughts on the schedule.  Filling the AHL cupboard.

Globe and Mail:  Deal reached to send NHL players to 2014 Olympics.  The Olympic news got short shrift today since soon thereafter the NHL released the 2013-14 schedule but as the NHL news slows down, fans will start to pay attention to the various Olympic squad compositions.

CBC:  Stanley Cup tours Winnipeg with Jonathan Toews.  Bringing the Cup home for the second time in four years and fans in the city reacted, coming out in huge numbers to check out Lord Stanley’s mug.