Winnipeg Free Press:  Jets prospects get call.  Always a good sign when you get the call from Team Canada.

Winnipeg Free Press:  Past and present NHLers visit children’s rehab centre.   Hull, Steen x 2 and Bogosian got together to bring some joy to some kids.

Winnipeg Sun:  Hockey royalty remembers Winnipeg’s Don Baizley as king of agents.  The hockey world descended on downtown Winnipeg yesterday to pay tribute to a legend who kept Winnipeg on the NHL map long after the Jets 1.0 departed our city. 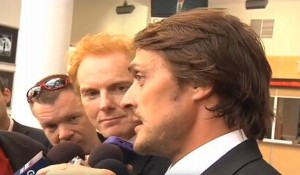 Illegal Curve:  Five members of the Winnipeg Jets file for salary arbitration.  The Jets big 3 RFAs (Bogosian, Wheeler and Little) filed as did Tangradi and Postma.  Despite the fact that this move wasn’t unexpected it caused some consternation amongst Jets nation.  In total 21 NHL players filed for arbitration on Wednesday, with the Jets group comprising 23% of that total.

Globe and Mail:  New Coyotes owner bought in when revenue-sharing model changed.  Appears that the owner has done his due diligence and with the five year out clause, should be in a good financial position while we wait to see how fans in Arizona react.  Will they see this new stability and begin to get behind the team?

Edmonton Journal:  Oilers acquire David Perron from Blues.  The Oilers certainly look like they are ready to try and get back to the playoffs.

Boston Herald:  Bruins, Rask make 8-year, $56 million extension official.  He certainly earned the title of #1 netminder in-between the pipes for the B’s this past season and they rewarded him with a long term extension.

Ottawa Citzen:  Senators, Canucks to meet in a game at B.C. Place.  When will the Heritage Classics ever stop?