Winnipeg Free Press:  Expect nothing, Jets fans… …and you won’t be disappointed.  Slow and steady wins the race is the mantra the Jets are employing so it seems unlikely they will jump ship in an attempt to make a splash.

Winnipeg Free Press:  One more free agent returns Jets’ pipes are full.  The team got him back for a pretty cheap price (1 year at 601 K) and if he can stay healthy, he can handle some of the load that Pavelec carried last season.

Winnipeg Sun:  Five trade targets for the Jets.  Ken provides a list of five interesting targets for Winnipeg.  Which player is one you covet?

Winnipeg Sun:  Plenty of talent for Winnipeg Jets to target in NHL free agency.  Taking a look at how thin this team currently is, they are going to need to get some stop-gap talent into the roster for this season.

Winnipeg Sun:  Ron Hainsey and other Winnipeg Jets UFAs drawing plenty of interest.  Plenty of teams are getting ready to overpay despite the fact that the cap is heading down.  The speculation is that both Antropov and Hainsey have played their last games as members of the Jets. 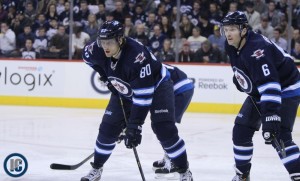 Globe and Mail:  GM says Coyotes on an ‘even playing field’ in free agency.  You could even say they have a leg up considering that their bills are being paid by the 29 other teams.

Toronto Sun:  Mikhail Grabovski rips coach after Maple Leafs buy him out.   After that exit don’t expect these two to be exchanging holiday or birthday cards anytime soon.

Star-Ledger:  Devils re-sign Patrik Elias for 3 years, $16.5 million; put Johan Hedberg on waivers for buyout.  I cannot believe that Elias has been with the Devils for 17 seasons.  Where does the time go?  From the talk at the draft, while many were elated to get Schnneider, the reality of losing the popular Hedberg curtailed the excitement slightly.