Barrie Colts official site:  Colts Comeback to Force OT, But Knights Prevail 5-4 in Game 6.  What is better than a Game 7?  After an improbable third period comeback, the Knights and Colts will do battle in London for the OHL Championships on Monday night.  Mark Scheifele was hit by Josh Anderson of the Knights which forced him to leave the game but he returned with a minute to go in the 3rd period.  If you’d like to see the game highlights, here they are. 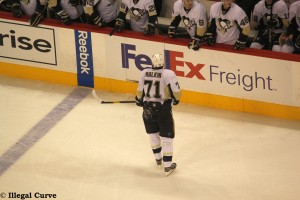 Newsday:  Tavares’ star is born after a strong playoff debut.