– Jets captain Andrew Ladd had a goal and assist in a 4-2 Canada win over Belarus (Boxscore here).  You can watch the highlights of the game here. 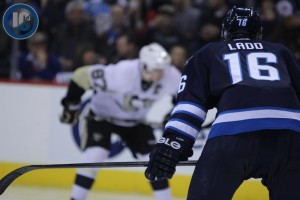 – Ondrej Pavelec made 23 of 25 stops as he won his second game in two days leading the Czech Republic past Slovenia (Boxscore here).  You can watch the highlights of the game here.

Colts official site:  Knights avoid elimination, defeat Colts 6-4 in Game 5.  Mark Scheifele has two assists but it wasn’t enough as London was able to win and keep the OHL Finals alive.  Game 6 is tonight in Barrie.

Roto World:  Mock draft.  Expect a lot of mock drafts as we get closer to the NHL Entry Draft in New Jersey on June 30th at the Prudential Center.  Here is a bit more on Valeri Nichushkin.

Detroit Free Press:  Red Wings send it back to Disneyland for Game 7.

St. Louis Post-Dispatch:  Blues are not the same.