Jets news: Jets at the World Championships. Is this the face of an Olympian? Picking 13th in the 2013 NHL Entry draft. Forward, defencemen and goalie grades. Jets jerseys off their backs.

Winnipeg Jets official site:  Jets at the World Championships.  Couple of Jets will for sure be playing for their respective countries as they clearly don’t want their hockey seasons to end.

Winnipeg Free Press:  Is this the face of an Olympian?  So what do you think?  Can Andrew Ladd make the jump to the big ice surface?  Would the captain make your Olympic roster?

Winnipeg Sun:  Jets to pick 13th in draft.  In an extremely anticlimactic 30 minutes TSN ran through the draft order and the only surprise was Colorado jumping ahead of Florida for the top pick.  The actual selection process took place at the NHL offices and commissioner Bettman explains the procedure for selection (see below).  The Illegal Curve crew will be down in New Jersey covering the draft on June 30th. 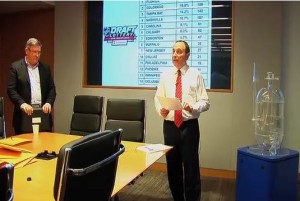 Illegal Curve:  Jets forward grades.  The guys gave out their end of season grades for the Jets forwards.  Agree or disagree?  You are welcome to add your grades to the list.

Illegal Curve:  Jets defencemen/goalie grades.  Similarly they gave out the marks for the defence and goalies.

Illegal Curve:  Jerseys off our Backs.  At the conclusion of the Season Finale against the Montreal Canadiens on Thursday, the Jets literally gave the jerseys off their backs to fans who were randomly selected during the 1st and 2nd intermission.  For those who missed the giveaway here are some sights from this end of season promotion.

OHL: Colts win Bobby Orr Trophy after Game 7 victory.  After blowing a 3-1 series lead, Mark Scheifele and his Colts held on to win the game by a score of 3-1 last night.  The Jets 2011 1st round pick had two assists which gives him 27 points in 15 games (8G 19 A) and the playoff points lead.  They now take on Max Domi and the London Knights for the OHL Championship.

Globe and Mail:  Penguins, Blackhawks rise above the playoff herd.  Erik Duhatschek is thinking we are gonna see a re-match of the 1992 Stanley Cup Finals (Sans Eddie the Eagle and Mario Lemieux).

Chicago Sun-Times:  Jonathan Toews is playoff leader for Blackhawks.  Can he take this team back to the promised land once again?  Many pundits are picking him to do exactly that.

Minneapolis Star-Tribune:  For Wild captain Koivu, ‘winning is all that matters’.  The Wild captain isn’t going to roll over and let the Hawks walk all over his team.  While many expect the Wild to be more complete team in the next year or two, these guys want to win now.

Winnipeg Sun:  Ovechkin’s playoff message ‘I’ll step on you’.  Local Sun reporter Ken Wiebe is covering the Capitals and Rangers opening round series so be sure to stay tuned as Ken brings his thoughts to this series.

Sports Illustrated:  NHL wants everyone on the ice, regardless of orientation.  The big news outside of the NHL yesterday was the revelation that current NBA basketball player Jason Collins came out about his sexual orientation becoming the first male athlete in any professional sport to be open.  The NHL, NHLPA and You Can Play have been working together to ensure tolerance in the NHL.