Winnipeg Free Press:  Odds of winning the draft lottery.  The Jets hot streak at the end of the season virtually guaranteed that if they didn’t make the playoffs they would be setting themselves up for a very low opportunity to get a high draft pick in the very deep 2013 draft.  The only good news is despite the chances being poor, the league removed the 4 space max movement when you win, so conceivably the Jets could go from 13th to 1st.  The draft takes place tomorrow.

Winnipeg Sun:  Making the grade for the Jets.  The guys broke down the Jets by grades yesterday and so did Ken in this article.  What do you think?  You are welcome to share your grades on this team.

Winnipeg Sun:  Higher learning.  Jacob Trouba did a lot of listening while here in Winnipeg and we shall get a quick opportunity to see what he learned while he joins Team USA camp for the World Championship. 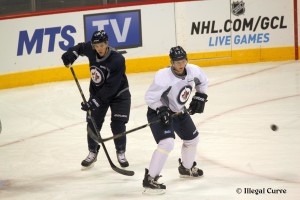 Jets official site: 12-13 Season Recap Video.  Video showing some of the biggest moment with the Winnipeg Jets this season.

CBC:  Dallas fires GM Joe Nieuwendyk.  The big news of the day yesterday wasn’t that all the playoffs positions in the West were set.  It was the report that broke mid day that Dallas GM Joe Nieuwendyk had been fired and was being replaced by Red Wings Assistant GM Jim Nill.

NHL.com:  All 16 teams decided  for the playoffs; seeds still to be determined.  While Jets fans cannot be happy that their team did not finish above the line the good news is they were in it until game 82.  While the teams playing today, the last day of the regular season, are already in the playoffs, they still have to determine who they are going to be playing against.

Jets tribute to the fans video: