Note:  The Jets will have their final chat with the media in an official capacity as the end of season interviews happen today and stick to @illegalcurve for all the latest news.

Winnipeg Free Press:  Kane stresses progress.  The seasons had ups and downs for the talented winger.  One can only imagine the level he might achieve when this team has linemates that compliment his talent.

Winnipeg Free Press:  Something more is required.  The team was what it was and it is quite obvious that many players know that changes will be made during the off season.  Even had Winnipeg snuck in the reality is this team has to make a number of improvements before they can be considered a serious playoff contender.

Winnipeg Free Press:  This end-of-season scenario old, and Jets fans and players know it.  Captain Ladd was rightly not looking at any positives following his team’s elimination from the playoff race.  He wants to be in the playoffs and challenge for a Stanley Cup.  A player with two rings already clearly showing the heart necessary to want more and the team is going to need to clone him or simply replicate his work ethic if they hope to be making it to that promised land.

Winnipeg Free Press:  Playoff hopes dealt fatal blow.  It was a fun ride while it lasted but alas the Jets couldn’t overcome that five game losing streak which took them from first in the conference to second, but dropped them from third to ninth in the conference.  Now as the NHL turns its focus onto the playoffs Jets fans are left with the task to wonder what can be done to improve this team and how might they look for the 2013-14 season. 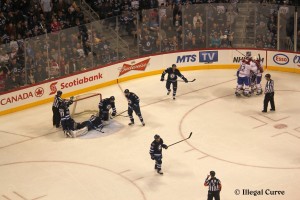 Winnipeg Sun:  Taking up where the Thrashers left off.  There has been a lot of futility surrounding this franchise but with the move to the West perhaps a corner will be turned.  Kirk also touches on players want new mindset for next season, pranks, booing contest winners, his comments regarding the coach Noel post-game firestorm and life out West.

Winnipeg Sun:  Just weren’t good enough.  It was interesting hearing the post-game comments from many of the Jets who discussed when they found out (listen below) they had been eliminated.  Hard to play with intensity when you know it cannot help you achieve your goal of making the playoffs.

Winnipeg Sun:  Next contest – The NHL draft lottery.  The fear of many was realized last night when the Jets were ensured a ninth place spot in the East.  Not good enough for the playoffs but also too high to get a top five pick.  The Jets have a chance for improvement in draft position due to changes to the system but there odds are not great.

Illegal Curve:  Presentation of the Winnipeg Jets awards.  These included the Dan Snyder Memorial trophy, the community service award as well as the Molson 3 Star winner.  Post includes video so you can get a taste of the atmosphere inside the MTS Centre.

Jets on a Deadline: 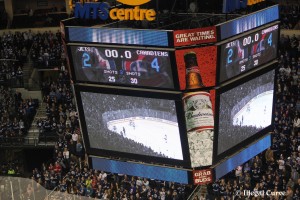 Post-game podcast from the Press box: Guest Host Michael Remis and Analyst Richard Pollock break down the Jets play against the Canadiens.