Jets opposition (Capitals) news: How Caps can clinch Southeast. It all comes down to this.

Note: Make sure to @ tweet @illegalcurve with your guess during tonight’s game you can win IC Gear by participating in our twitter Game Winning Goal contest. Remember that for your vote to qualify you must send in your guess by hashtaging (#) our Game Winning Goal (GWG). (i.e. #ICGWG Clitsome).

Winnipeg Free Press:  ‘Every game is huge,’ says Pavelec.  Ondrej Pavelec is trying to stay even keel without putting too much on the game which is probably the right approach.  One thing he said might not be accurate however as he states “Now I’ll have a good nap” as according to Rick Ralph the hotel where the Jets are staying was testing the fire alarms.  That will make for some unhappy Jets.  We shall see if that impacts tonight’s results.  Article includes video of Pavelec talking following practice.

Sportsnet:  Season on the line.  People are talking about the little team that could.  The one many pundits to be a bottom basement team who now have a chance to challenge for the 3rd spot in the East.

Winnipeg Free Press:  Unlikely heroes slice Sabres.  The opening goal was scored by Aaron Gagnon on a great feed by Derek Meech, which are not two names Jets fans are used to seeing on the score sheet.  Pretty ironic that the game winning goal (his second game winner of  the season out of three goals total) was scored by Antti Miettinen who had been a healthy scratch and who has been much maligned for his lack of production.  While the top line had plenty of chances the Jets are always happy to not have to rely on them every single game.


Winnipeg Free Press:  Pleased to Meech-ya.  Nicely done by the Manitoba native as he replaced Zach Bogosian and played an instrumental role in yesterday’s game.

Winnipeg Sun:  Wellwood lost to Jets.  Another late season exit for Kyle Wellwood who last year was lost to a broken foot and is now done after suffering an “upper body” injury, which we all know is something to do with his hand after he blocked a Vanek shot in the win over the Sabres. 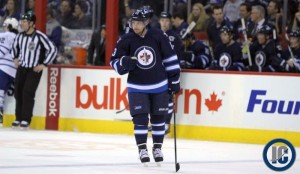 Winnipeg Sun:  Game snapshots.  At times during the season you could question the team’s heart/desire to win but not last night.  They started off the game taking it to the Sabres and played a complete, 60 minute hockey game and if not for a red-hot Enroth the score may have been five or six to one.  Ted also looked at Enroth’s brilliance, Kane’s penalty shot predictability, play of Pavelec, AHL connection gets it done, Ladd a star, Santorelli a catalyst and more.

TSN:  Jets win sets up season-defining clash with Caps.  I think it is finally fair to say that tonight is now the biggest game of the year as the Jets look to get back above the playoff line at the expense of their Southeast division rival.  It is the final game the Jets play against a fellow member of the division and a win could ensure that a division banner is hanging from the MTS Centre rafters.

Globe and Mail:  Surging Jets keep playoff hopes alive.  Who would have believed that this team would pull off a 6-0-1 run after losing five straight games between March 28th to April 4th.

Illegal Curve:  Jets on a Deadline.  Game recaps, video highlights and the NHL.com 3 Stars of the night.

Yahoo Canada:  Anthony Camara snipes Game 3 OT winner.  Mark Scheifele was limited to just one assist in the win and he now has the lead in playoff points with 22 in 11 games (7 goals, 15 assists).

Washington Times:  How Caps can clinch Southeast.  It might not be do or die for the Caps but it certainly is for the Jets (although based on the Senators slide perhaps not).  If the Capitals win, they clinch a post-season berth.

Washington Post:  It all comes down to this.  The Capitals have reeled off win after win ever since they tore apart the Jets on back to back nights in the MTS Centre back in March and haven’t looked back as they erased a nine point standings deficit to now sit one point up with a game in-hand.

Video of the night – Pavelec flashes the gloves: