CBC:  Jets fans ready to ‘blow the roof’.  Don Cherry used to say that the old Winnipeg Arena was one of the nosiest places in the NHL.  Expect the celebration at the MTS Centre to equal and perhaps surpass any noise levels that were achieved in the past.

Winnipeg Free Press:  Jets have already won over fans, now they have to win games.  The impression I have from this group of players is that they have a legit shot at the post season and if they do that this season, they will have made 700,000 people in Winnipeg even happier.

Winnipeg Free Press:  Times sure change over 15 years.  It seems almost incomprehensible to those of us who remember the NHL in 1996 to the NHL of today.  Social media alone makes it a vastly different environment for fans and the players.

Winnipeg Sun:  Jets’ Stuart a crowd pleaser.  After meeting Mark Stuart for the first time at the Jets jersey reveal at 17 Wing, I could tell that he has what it takes to be a real crowd pleaser.  Super nice/genuine guy who the fans are going to really like.

Winnipeg Free Press:  Tinker with chemicals before finalizing formula.  This group seems to have a lot of chemistry already, but discovering that scoring formula will be the next science experiment that they should focus on.

Winnipeg Sun:  Jets players put positive spin on hitting the road.  As Blake Wheeler said yesterday to the media, it seems like these guys just want to make sure they are in the linup for the October 9th home opener.

Kamloops Daily News:  Madaisky to be on ice for historic game.  The Blue Jackets rookie will be in for the experience of a lifetime when he takes to the MTS Centre ice tonight.

Winnipeg Sun:  Got grit?  Jets think so.  Seems a lot of the players are not wanting to be stuck with the label of fighter or enforcer, but won’t shy away from the rough and tumble.  During Evander Kane’s interview yesterday, he seemed to think this team will be able to handle itself. 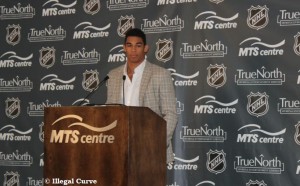 Winnipeg Sun:  Plenty of room for fighting in NHL.  Further to this article and as Remis reported yesterday, the Jets Glass sees a place for it in the game still.

Winnipeg Sun:  It’s gonna get loud.  Perhaps they will crack out the old decibel meter to see if the Jets fans can hit new heights.

Globe and Mail:  Jets face early chemistry test.  This was the buzz word around the media room yesterday.  (This article was in yesterday’s afternoon news but b/c it was a late addition, I felt that it was worth sharing with those who missed it yesterday).