Note: Tune into the NHL Mid-Week Show on TSN Radio 1290 tonight from 6 pm to 7 pm as the guys, joined by yours truly who will be sitting in for Drew Mindell, to discuss all the latest NHL news. Guests:  Mike Colligan (The Hockey Writers), Mike Harrington (Buffalo News).

Globe and Mail:  52+ points or bust.  Based on Mirtle’s math the Jets need to simply play .500 hockey for the stretch run to get into the playoffs.  Considering they have been playing .600+ hockey over their last 10 games, this shouldn’t prove too tall a task.

USA Today:  Buyer or seller?  Team-by-team look at trade deadline.  Kevin Allen looks at all 30 NHL teams and labels the Jets as neither buyers or sellers but as traders.

Illegal Curve:  Coach Noel audio from Pittsburgh.  Update on injuries (Stuart is probable and/or possible, Wright – IR, Peluso – week-to-week, Slater – not on trip).  Happy with the way they opened the game last night in Carolina?  Would a trade impact team chemistry?  Guarding against guys looking too far down the road?  How do the Jets handle the Penguins?  Has he done a lot differently since the Capitals losses?  Is his strategy of resting players paying off?

Winnipeg Free Press:  Jets show intensity, Carolina does not.  I thought it was an even 1st period, Carolina controlled play for first 10 minutes of the 2nd, and then it became the Jets show.  Pretty well played road game by Winnipeg.  And pretty nice Real Housewives reference by Gary.

Winnipeg Free Press:  Kane & Co. whip Canes.  The Jets could start a roll this week that could propel them into the post season if they keep this up.

CBC: Fans can start saving for playoff tickets.  The beauty of the Eastern Conference is that every time a team looks to have found its way, they flounder just as quickly.  Not one team from 8th spot New York Rangers (35 points) to the 14th spot Philadelphia Flyers (28 points) have risen to the occasion and played consistent hockey.  Sports Club Stats has moved the Jets chances at post season play up 17% to 76.2%. 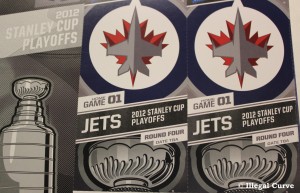 TSN:  Win gives Winnipeg some cushion in Southeast.  A Jets win over Carolina, coupled with losses by Washington and Florida were very good news as Winnipeg continues their quest to win the Southeast division.

Winnipeg Sun:  Jokinen breaks scoring drought.  He hadn’t scored since February 26th and it must have been a considerable weight off his back.

Winnipeg Sun:  Kudos for Kane.  He provided this team with something they desperately needed, which was secondary scoring.  He ended the night with one goal and three assists. 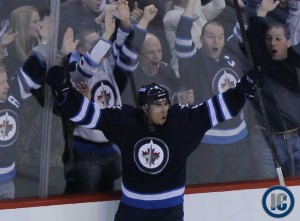 Winnipeg Sun:  Jets handle Hurricanes, extend division lead.  Check out the above standings.  While the Jets have played more games than most of their competition, they continue to get critical points when they need them.  Despite the two bad losses at home to Washington, the Jets have continued on a torrid pace having gone 8-3-1 over their last 12 games.

Jets on a Deadline – Jets 4 Hurricanes 1:

Jets on a Deadline:  Game recaps, post-game coach Noel comments, video highlights and the NHL.com 3 Stars of the night.

St. John’s IceCaps:  Preview IceCaps at Devils.  Despite a modest two-game winning streak, the Caps are sitting in 14th in the Eastern Conference and are well behind a playoff spot.

AnnArbour.com:  Michigan defenseman Jacob Trouba unsure if he’ll turn pro.  Should he stay or should he go now?  Thanks to reader Allen Tucker for pointing out this article.

Detroit Free Press:  Wolverines Red Berenson looks back on season.  If you missed the news yesterday, the speculation in Winnipeg was whether or not Jacob Trouba would turn pro.  Here are coach Berenson’s comments about the Jets #1 draft pick in 2012.

Winnipeg Free Press:  Seeing the light on visors.  After seeing what their brother has gone through, seems like a no-brainer that the Staal brothers made the decision to wear visors.

The Hockey Writers:  Why did the Penguins acquire Brenden Morrow?  Sometimes a player brings intangibles to the game which cannot be quantified by a stats page.  We will ask Mike more about this deal as well as other moves made by Pittsburgh tonight when he joins us on NHL Mid-Week on TSN Radio 1290.

Pittsburgh Post-Gazette:  Penguins’ win streak reaches 13, Fleury forced to leave game after collision.  Sounds like the Penguins and Canadiens played a relatively heavy game as the two Eastern powerhouses threw everything they had at each other (including opposition players it would appear).  Bad news for the Pens could be good news for Winnipeg as the team that loves to bust streaks will be in the steel city on Thursday.

Calgary Herald:  Report has Kiprusoff refusing to leave Calgary if traded.  The sideshow in Calgary continues as attempts to rebuild hit a snag as longtime goalie Kiprusoff reportedly put his foot down on being traded.

Globe and Mail:  Onus on Feaster to create Iginla bidding war.  With the success of the Pittsburgh Penguins, you know that the rest of the elite teams are going to be dying to get themselves a player of Iginla’s pedigree.  Driving up the cost can go a long way to re-building the reputation of the Calgary GM, which took a big hit as a result of the O’Reiley offer sheet debacle.

Video of the Day – Mr. T shoots at United Center: