Winnipeg Free Press:  Will Trouba go pro?  This rumour has been making the rounds since the University of Michigan Wolverines playoffs ended.  Seemed like a long shot at the beginning of the season, but who knows.  We will look at the potential ramifications of this decision on Wednesday’s NHL Mid-Week with Illegal Curve Hockey on TSN Radio 1290.

Winnipeg Free Press:  Staying ahead powers Jets past their woes.  There is no time to take your foot off the gas at this point in the season.  Take a look at the standings, they are too close to take any nights off.

Winnipeg Free Press:  Captain Ladd steering this ship.  Ladd and his first line mates played an excellent 200 foot game yesterday.  They pretty much were everywhere all game long and this type of effort is going to be needed to continue to propel this team forward.

Winnipeg Free Press:  Pavs leaves praise to others.  We have used a lot of space in the papers to praise the nightly effort of Ondrej the Giant.  His numbers are not elite with a GAA of 2.83 (49th), SV% of 9.02 (52nd) but clearly numbers don’t tell you everything you need to know about a player.  He has stood tall when this team needed him and as we saw again last night, made critical saves to maintain momentum for his team.

Winnipeg Sun:  As Pavelec goes, so go Jets.  There is no question that he has been the MVP of this team.  If not for Pavelec, who knows where the Jets would be right now.  Ted also covers Jets scoring first, coaching sympathy, frank injury talk and bad penalties. 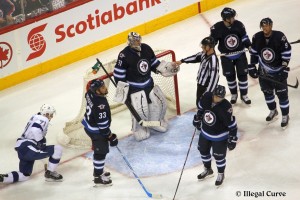 Winnipeg Sun:  Tobias Enstrom back in force.  He scored the game winning goal last night and was a force to be reckoned with all over the place.  He quarterbacked the power play and showed why he was so important to this team.

Winnipeg Sun:  Pavelec all class.  Always nice to read these types of stories about the players who make Winnipeg their home during the season.

Jets on a Deadline – Jets 3 Lightning 2: 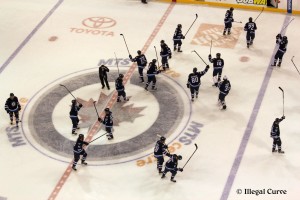 TSN:  Maxwell scores twice as IceCaps defeat Monarchs.  Looks like Eric O’Dell could bear some further watching as he keeps adding to his goal scoring streak.

University of Michigan:  U-M bid for 23 ends in Final CCHA.  Trouba’s Wolverines are out, but he was named to the all-tournament team.

Pittsburgh Post-Gazette:  Penguins complete trade for Dallas captain Morrow.  The Pens, who are riding a 12 game winning streak, finished off a big deal to add some depth for a long playoff run.

Star-Ledger:  Devils Ilya Kovalchuk out two to four weeks.  Just as the Devils were starting to get going (having won last two games), they lose a major part of their team. 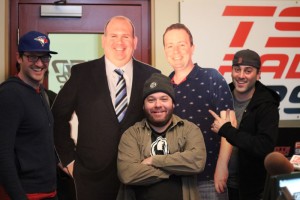 Part 1: Recap of Capitals 6-1 victory over the Jets. Ondrej Pavelec’s workload and line combinations. The Jets remaining schedule. Southeast Division schedule. Olli Jokinen’s production on the power play (or lack thereof). What to do with Alex Burmistrov.

Part 2: Would you trade Ron Hainsey if; the Jets were 3rd in the conference, 8th in the conference, within 2 points of a playoff spot, more than 3 points outside a playoff spot? Interview with Aaron Portzline of the Columbus Dispatch. Interview with Mark Guy of Newport Sports Management (Corey Perry’s agent). Players who might be dealt at the trade deadline. The market for goalies at the trade deadline. Rapid Fire: Suspensions. Cheers & Jeers.