Jets news: Noel says quiet confidence emerging as Jets win close games. Kane adds to point streak, Noel impressed by ‘dangerous’ play. Jets have started to figure it all out. Rolling in New York. Call off the coroner, the Jets are alive. Jets close out road trip with win over Rangers. Playoffs may not a pipe dream. Players like look of NHL realignment plan.

Jets next opponent (New Jersey Devils) news: Brodeur placed on IR, out at least until Monday. Travis Zajac hoping for a memorable homecoming in Winnipeg.

ECHL.com:  Peluso scores first NHL points.  We are seeing more players from the ECHL making it to the NHL and Anthony Peluso, who played 27 games with the Alaska Aces back in 2009-10, is one of those guys.

Winnipeg Free Press:  Noel says quiet confidence emerging as Jets win close games.  A lot nicer to be on the winning end of a close game than the alternative.

Winnipeg Free Press:  Kane adds to point streak, Noel impressed by ‘dangerous’ play.  He has the best streak going in the NHL and he will look to continue that success at home on Thursday.  Jets fans have to be happy with the play of their young gun.

Winnipeg Free Press:  Jets have started to figure it all out.  The Jets played a heavy game in NY and aside from a flurry at the end of the game, played an extremely impressive game considering it was their fifth game in nine days.   They left the Peg’ with a lot of skepticism from fans that this group could not get it done and they really got it together.  They have two important games at home before heading back on the road for three in Del Boca Vista aka Florida.

CBC:  Call off the coroner, the Jets are alive.  It really would be funny to see the cross section of newspaper headlines throughout this season.  One day the Jets cannot beat themselves and the next they are unstoppable.  Coach Noel seems resigned to this reality as he tries to maintain the focus on each game and not get too high or too low following a win or a loss.

Winnipeg Sun:  Jets close out road trip with win over Rangers.  At points the team looked very tired but considering they played five games in nine days and finished with four wins, that is completely understandable.  Ken has all the post game video reaction from coach Noel, Evander Kane, Ondrej Pavelec, Olli Jokinen and Anthony Peluso.

Winnipeg Sun:  Playoffs may not a pipe dream.  While it is usually a good idea to try and curb our enthusiasm going four and one on this tough road trip has people in this city talking playoffs.  Now before we go planning any parades down Portage Avenue, the Jets remain 9th in the Eastern Conference but are however in a three way tie for 1st in the Southeast division.  So what do you think?  Do the Jets make the playoffs this season?  Paul also covers performance at MSG, karma, improved PK, end of Torts?, Callahan’s character and the realignment talk.

Winnipeg Sun:  Players like look of NHL realignment plan.  Captain Ladd says he is a fan of the new alignment.  CBC’s Elliotte Friedman broke the details on Saturday’s Hot Stove and the playoff structure was further discussed by TSN’s Bob McKenzie and ESPN’s Pierre LeBrun.  Here is a link to a post we did which lays out all of the above.

Illegal Curve:  Jets on a Deadline – Jets 4 Rangers 3.  Game recaps, video highlights and the NHL.com 3 Stars of the night. 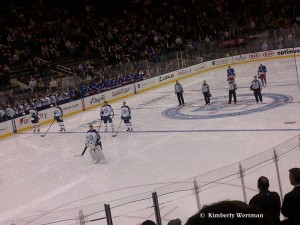 TSN:  Beaulieu’s pair of goals leads Bulldogs past IceCaps.  One of the few defenceman left on The Rock, Derek Meech was unable to lead his team to victory.

Swift Current site:  Broncos at Brandon Wheat Kings preview.  Jets prospect Adam Lowry is five away from achieving of 200 points in the WHL.  Game starts at 7 pm tonight in Brandon.

The Record:  Brodeur placed on IR, out at least until Monday.  Looks like Jets fans will be seeing the Moose (Johan Hedberg) who played for the Manitoba Moose, on Thursday night.

Star-Ledger:  Travis Zajac hoping for a memorable homecoming in Winnipeg.  He missed both chances to play in Winnipeg last season due to injury but will have 30-40 family members in the crowd on Thursday as his suddenly struggling Devils take on the Jets.

CBC:  Habs trade Cole to Stars for Ryder.  Both teams seem to be happy with the player they are getting in exchange to help fill a need.

Globe and Mail:  Proposed NHL realignment creates competitive inequity. What seems to be most glaring omission is the fact that that this plan doesn’t account for possible relocation.

Globe and Mail:  Many NHLers trying to shake off the Swiss effect.   I watched some of the Jets playing over in Europe during the lockout and it was very clear that they were playing a significantly different game than what we are used to seeing here in North America.