Note:  Tune into the Illegal Curve Hockey Show on TSN Radio 1290 as the guys discuss all the latest Winnipeg Jets and NHL news from noon to 3 pm today.  Guests: Mike Harrington (Buffalo News) and Jack Edwards (Play by Play voice of the Bruins for NESN).

Winnipeg Free Press:  It was Pens vs. pencils.  The Jets were certainly given their chances to win and they could have had a much different fate.  The 1st star of the game was the difference but the Jets had many good opportunities to get back into the game.

Winnipeg Free Press:  If at first you don’t succeed, get worse.  It has been argued in Calgary for what seems like the last five years, should you blow up the team and rebuild or continue to try and make the existing pieces work?  They did it in Edmonton and expectations are within a year or two the Oilers will be formidable.  However it is always difficult to get a fan base to buy into the notion that you will not be competitive for a few years.  Especially when fans are paying some of the most expensive ticket prices in the game.

Winnipeg Free Press:  New guy Tangradi catches Noel’s attention in Jets debut.  Tangradi was asked to go up against his former team mates of just a few days earlier and he looked pretty solid.  He played just under 13 minutes and had a number of decent scoring chances as well as a bunch of solid bodychecks.

Winnipeg Sun:  Jets left heart on the ice against Pittsburgh says Coach Noel.  As I said yesterday, fans will never be happy with a loss but if the team losses but puts forth an honest, hard-working effort then they will certainly be a lot more understanding.  While the Jets were unable to put more than one past Marc-Andre Fleury, the team collectively played well.  If not for the 5 on 3 who knows how this game may have gone.

Winnipeg Sun:  Jets have lost home ice magic.  Have visiting teams figured out a way to block out the 15,004 rambunctious fans at the MTS Centre?  The Redmond penalty was the back breaker and one many were surprised was called. 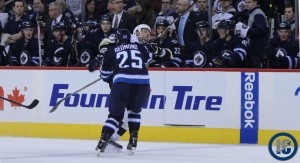 TSN:  Lack of scoring costs Jets again in loss to Penguins.  Winnipeg has not scored more than three goals since January 27th when they put five past the Islanders.

Winnipeg Free Press:  Fan fooled by scam on Kijiji.  This is why the Jets would advocate fans to use the system they have set up so you can legitimately buy tickets without concern of being ripped off.

Jets on a Deadline – Pittsburgh 3 Winnipeg 1:

Illegal Curve Post-game podcast from the Press box: Host Drew Mindell and Analyst Richard Pollock break down the Jets play against the Penguins.