CBC:  In the room with centre Jim Slater (video).  Mitch sits down with Jim Slater to talk about the injury to Karlsson, what the Jets need to do to beat the Penguins and his faceoff prowess. 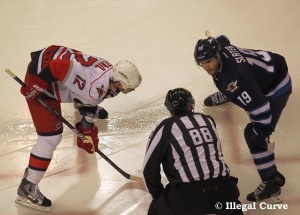 TSN:  Bogosian returns to line-up as Jets host Penguins.  Music to Jets fans ears (or eyes since you are reading the news not listening to it).

Winnipeg Free Press:  Tangradi’s first game as a Jet against old teammates on Pens.  He was already surrounded by media this morning and based on his answers Jets fans are going to be in for quite a treat from their new left winger.

Illegal Curve: Coach Claude Noel pre-game press conference.   Penguins talk.  Switching up lines with hope to get guys going.  Having a healthy defence corps for the first time this season.  Has Burmistrov made an impact and what changes has he seen?  Developing consistency in a shortened season.  Team physicality.  Describes the game  he would like his team to play.  Will they monitor Bogosian?  Will the Jets respect of Pens get the team ready to play?

Video to watch – Manitoba man goes bananas at the rink: