Jets news: Jets pick up Tangradi from Pittsburgh. Woman wins lawsuit over Jets tickets. Kane says criticism toward him is racially motivated. Eddie Pasquale recalled from St. John’s IceCaps. Talented Wheeler needs to step it up. Down day at the Jets office. Struggle to find scoring. Pavelec needs to regroup for Penguins … and he’s not the only one. Showing no firepower through first quarter of season. Anthony Peluso goes in with a bang; Jets coach Claude Noel not so impressed. 5 points to ponder as Jets hit quarter-mark of season. Organization reaping benefits from 2008 NHL Draft.

Jets on a Deadline – Philadelphia 3 Jets 2: Audio from the Jets and Flyers dressing room. Post-game podcast.

Winnipeg Free Press:  Jets pick up Tangradi from Pittsburgh.  Always a bit awkward when you trade for a player with a team you are about to face.  Should be interesting on Friday if Tangradi gets into the lineup.

TSN:  Kane says criticism toward him is racially motivated.  Of course it is fair to say and I’m sure there is some basis to his statement but I would also think that a fair bit of the critic he has faced in this Province has nothing to do with race and everything to do with attitude.  What do you think?

Winnipeg Free Press:  Jets recall goaltender Eddie Pasquale from the St. John’s IceCaps.  We will have a better idea of the injury on Thursday when coach Noel addresses the media (today there is no availability).  And by a better idea I mean we will be told it is a lower body injury.

Winnipeg Free Press:  Talented Wheeler needs to step it up.  While he continues to get points he is not dominating games the way many expect he can.  Jets need Wheelers to take it to the next level if they want to compete.

Winnipeg Free Press:  Down day at the Jets office.  The Jets need to get into a winning grove as they simply cannot win, lose, win, lose if they hope to make a playoff run. 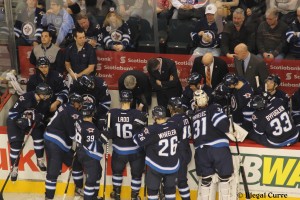 TSN:  Struggle to find scoring.  Go down the list and the Jets forwards are for the most part having very ordinary seasons.  Wellwood, Antropov, Ponikarovsky, Jokinen and Burmistrov all have under 4 points in 12 games.  Simply not acceptable.

Winnipeg Sun:  Pavelec needs to regroup for Penguins … and he’s not the only one.  In a condensed season you cannot afford to dwell on a loss for long.  The Jets have the day off tomorrow but you can bet that coach Noel and company will be watching tape to prevent a replay of last night’s game on Friday against Pittsburgh.

Winnipeg Sun:  Anthony Peluso goes in with a bang; Jets coach Claude Noel not so impressed.  A curious decision by coach Noel to pull Thorburn in favour of Peluso.  Despite it being his Winnipeg debut, after four minutes of penalties early in the game, he was not out on the ice for the remainder of the game. 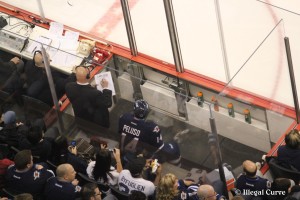 Winnipeg Sun:  Showing no firepower through first quarter of season.  Scoring is not something this team has done so far this season.  In fact, in the last seven games the Jets have not scored more than three goals in a game.


Winnipeg Sun:  Snapshots – That’s how it is with the Jets.  The life of an enforcer.  Plethora of defencemen.  Kane’s scoring problem.  And much more.


CBC:  5 points to ponder as Jets hit quarter-mark of season.  Five things to consider as this season is twenty-five percent of the way complete.

Hockey’s Future:  Organization reaping benefits from 2008 NHL Draft.  Bogosian and Redmond are the cream of the crop of that Thrashers draft class.

Jets on a Deadline – Philadelphia 3 Jets 2: 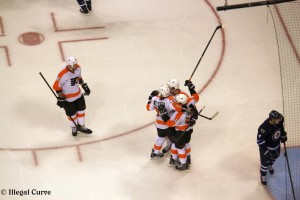 Illegal Curve Post-game podcast from the Press box:  Host Drew Mindell and Analyst Richard Pollock break down the Jets play against the Flyers.