NHL news: Who should be patient and who should panic? Lack of stiff opening round opposition a double edged sword for Canada in Sochi. NHL and IOC in Olympic stand-off. Blackhawks hope to continue road momentum during homestand.

Winnipeg Free Press:  Looking healthier as they get set for Flyers.  Just what the doctor ordered.

CBC:  30 Thoughts.  Friedman’s column is always a good read and today’s he takes note of the Jets PK woes in point #13.

Winnipeg Free Press: Byfuglien predicts he’ll play vs. Flyers. He was in fine form when he spoke with the media today. Joked that his lower body injury was in fact wax build up in his ear. What isn’t a joke is the need for the Jets to have him back and healthy in the lineup. 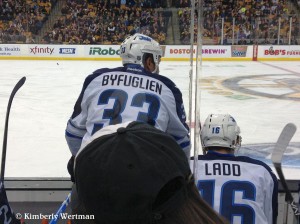 Winnipeg Free Press: Monu-freaking mental. The mood around the MTS on Sunday was definitely lighter. While they haven’t counted themselves as giant slayers a tight road win does a lot for the team confidence.

Winnipeg Sun: Coach Noel won’t reveal starting goalie for Tuesday’s game.  Do we have a goalie controversy brewing in Winnipeg? After a solid start by Montoya and Pavelec who is still recovering from the flu, it would appear that coach Noel doesn’t need to find himself an Alain Vigneault coin just yet.

Winnipeg Sun:  Hainsey logging major ice time.  He has had to step up in the absence of Dustin Byfuglien and Zach Bogoian and he has done so for his coach.

Winnipeg Sun:  Kane embraces new role on penalty kill.  When asked about it Kane said it was a role he played when he first came into the league and one he is not afraid to handle now.  When asked about using Kane on the PK, coach Noel revealed that the addition of speed to the penalty kill gave his team and advantage.

Illegal Curve: Coach Noel post optional skate presser. Talks about Byfuglien practicing with the team. Talk turns to Bogosian. Buff expects to play on Tuesday. Discusses importance of win over Senators. Getting past adversity. Kane and Burmistrov embracing the role of penalty killers. Importance of adding speed to PK. Possibly using Montoya in net on Tuesday. Would he flip a coin similar to Alain Vigneault? (joking) Expanded role of Ron Hainsey.

Illegal Curve: Jets audio from the MTS Centre. Dustin Byfuglien and Evander Kane. While all our audio is must listen to (of course) the Big Buff clip is really good. He was in fine form as he cracked 3 jokes during the scrum.

NHL.com: Who should be patient and who should panic? Of the 5 teams that are seen as contenders, just the Capitals and Kings are ones who should be hitting the panic button says Dan Rosen.

Globe and Mail: Lack of stiff opening round opposition a double edged sword for Canada in Sochi. Which would you prefer to see Team Canada take part in? A ‘group of death’ made up of extremely difficult competition which will force Team Canada to become toughened early. Or an easier path to the medal round, where they will be able to moderately test themselves as they prepare for the tougher competition?

Globe and Mail: NHL and IOC in Olympic stand-off. Dealing with the Olympics, working on realignment and finishing off the CBA. It is going to be quite the week in New York.

Chicago Sun-Times: Blackhawks hope to continue road momentum during homestand. Another win on the road, this time in Nashville, and the Hawks remain the only team unbeaten in regulation.