Jets news: Focus on the basics helps bring penalty kill back to life. Poni isn’t the goat today. Wrinkle in the crease. Ready to take Flyer on Montoya? Encyclopedia of local sports sees final NHL game. Jets on a Deadline.

Note:  Stick to @illegalcurve as we will have all the latest from today’s optional skate at the MTS Centre.

Illegal Curve:  Coach Noel post-practice scrum.  Talks about Byfuglien practicing with the team.  Talk turns to Bogosian.  Buff expects to play on Tuesday.  Discusses importance of win over Senators.  Getting past adversity.  Kane and Burmistrov embracing the role of penalty killers.  Importance of adding speed to PK.  Possibly using Montoya in net on Tuesday.  Would he flip a coin similar to Alain Vigneault?  (joking)  Expanded role of Ron Hainsey.

Winnipeg Free Press:  Focus on the basics helps bring penalty kill back to life.  As coach Noel states and this mirrors what I thought while watching the game, the Jets PK seemed more aggressive than before. 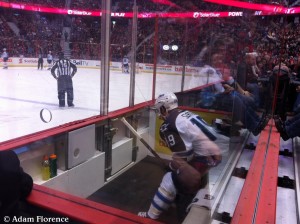 Winnipeg Free Press:  Poni isn’t the goat today.  The look of surprise on his face when he tipped home the Wellwood shot and scored was classic.

Winnipeg Free Press:  Wrinkle in the crease.  Before the game had even ended we asked on twitter how long before Montoya’s performance causes people to call into the post-game show with Rick Ralph stating Montoya needs to be the stater.  Big kudos to the Big Cubano who played a very solid game yesterday.  His positioning was excellent and he discarded the rust he showed against the Islanders.

Winnipeg Sun:  Ready to take Flyer on Montoya?  More on the Jets requirement to make a decision on who should start against the Flyers on Tuesday.

Winnipeg Free Press:   Encyclopedia of local sports sees final NHL game.  He was a familiar face at the rink and stadium and the Jets held a moment of silence for him before the Jets and Leafs.

Illegal Curve:  Jets on a Deadline.  Game recaps, video highlights and the NHL.com 3 Stars of the night. 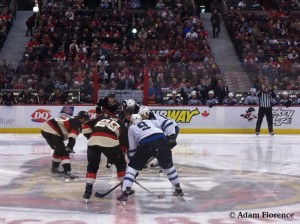 The Telegram:  Whale sink IceCaps.  Another loss for St. John’s, their third in a row.  They have a chance for revenge tonight against Connecticut.

Barrie Colts official site:  Colts come up short, lose 5 – 3 to the Saginaw Spirit.  Mark Scheifele continues his strong play in the OHL as he finished with a goal and an assist in the loss.

CBC:  IIHF’s Rene Fasel says ego may keep NHL from Olympics.  Would be a real shame if ego got in the way of this opportunity.

Roberto Luongo was the guest on Hockey Night in Canada After Hours: