NHL news: Wayne Gretzky in no hurry to return to the NHL. Underage players proving their worth around NHL. Did Habs GM win Subban signing?

NHL play of the Night: Kari Lehtonen made a sensational save.

Note:  Be sure to stay tuned to @illegalcurve as we will be bringing you all the latest from tonight’s Jets and Habs game which begins at 6:30 pm cst. During the game you can win IC Gear by participating in our twitter Game Winning Goal contest Remember that for your vote to qualify you must send in your guess by hashtaging (#) the Game Winning Goal (GWG) contest.  (i.e.  #ICGWG Kane.)

TSN:  Canadiens host Jets on TSN Canadiens, TSN Jets, TSN Radio.  It will be quite the battle tonight in Montreal as the two teams riding three game winning streaks are set to clash.  Whether at home or in the car tune into TSN for all the game action.

Winnipeg Free Press:  Growing up before our eyes.  Just one year removed from the first season in Winnipeg and already so many improvements.  Fans will have to hope they don’t see any relapses back to last year.

Winnipeg Free Press:  East is no Eden.  While the Jets are centrally located playing in the Southeast division just doesn’t make a lot of sense.

Winnipeg Free Press:  This just in – He loves the Jets.  Peter Mansbridge is a big fan of the Jets.

Winnipeg Sun:  Discipline sure sign of growing maturity.  One sure fire way to ensure the puck has less of a chance of ending up in your net is to play smart hockey.  The Jets have done that this season, currently with the least number of shothanded opportunities in the NHL. 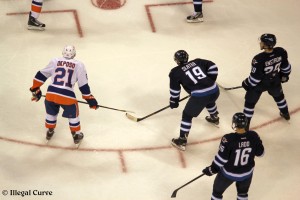 Winnipeg Sun:  Coach Claude Noel keeping things in perspective.   Coach Noel has his lasso ready to rein in the fans and the media from getting too far ahead with planning a Stanley Cup parade down Portage Avenue.  While he is clearly pleased with where his team currently sits, there are still a number of areas in which they have to continue to progress if they want to have continued success.

Winnipeg Sun:  Alex Burmistrov playing hard-nosed game.  Burmistrov has continued to develop his physical play this season.  He isn’t afraid to mix it up with the biggest players on the opposition (i.e. the Bruins Chara, who if you recall he also took on last season) or take on similar sized forwards.  He has played with an edge this season and his team mates and coach have taken notice.

ESPN:  NHL hockey power rankings.  Looks like Pierre LeBrun has shot the Jets up 14 spots on the list.  Not surprisingly, it appears the atmosphere at the MTS Centre has played a part.

Illegal Curve:  Coach Noel off-day presser.  PK improvement.  Accountability due to leadership group.  Improvements team needed to make for this season.  Why is his team better able to handle things this year?  Not looking too far ahead.   Development of Burmistrov.  Keeping team in-balance.  Reluctance to put too much into five games.  Shortened season impacts his interaction with team.  Assessment of the upcoming game against the Canadiens.  Needing to have consistency in the group.

Toronto Sun:  Wayne Gretzky in no hurry to return to the NHL.  After all he has given to the game of hockey, he can pretty much do whatever he would like and not many are going to make a peep.

TSN:  Underage players proving their worth around NHL.  From what we have seen from the Jets Scheifele it would appear he will be sent back down to Barrie after a little more seasoning with the big club.  Lots of young players however will be sticking around for the shortened NHL season.

ESPN:  Did Habs GM win Subban signing?  Consensus appears to be that rookie Montreal GM Marc Bergevin faced his first big challenge and passed with flying colours as he managed to sign the dynamic Subban for a total of 5.75 million for two years.  Now the good news for Subban is he will get the lions share of the contract dollars (3.75 million) next season.  This gives the Canadiens GM two years in which to determine how much his asset is worth but at the same time he could pay through the roof when it comes time to negotiate the next Subban contract.

The Dallas Stars Kari Lehtonen made a sensational save against the Columbus Blue Jackets last night.