Note: We are at the conclusion of the sixth week of the Team Illegal Curve Beard growing competition as Ezra and Drew help support the Heart and Stroke Foundation of Manitoba in conjunction with the Festival du Voyageur in the 31st annual beard growing contest. Every Friday we will be giving readers an update on the beard progress and here is Ezzy and Drew’s growth from Week 5 to Week 6:

Note III: Be sure to stay tuned to @illegalcurve as we will be bringing you all the latest from the MTS Centre as the Penguins visit the Jets. During the game you can win IC Gear by participating in our twitter 50/50 and Game Winning Goal contests. Following the action, Dave and Ez will have post game reactions from the Winnipeg and Pittsburgh dressing rooms.

CBC:  Evander Kane sports new haircut.  I suspect if anyone takes umbrage with this it is due to hair follicle jealousy more than anything else. 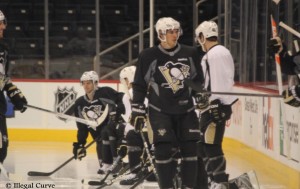 CBC:  Pittsburgh vs. Winnipeg.  A preview of tonight’s game action.

Winnipeg Free Press:  Fearsome Pens a bit test tonight.  The Jets are going to see how they measure up against one of the most formidable teams in the East tonight.

Winnipeg Free Press:  Big Buff carrying heavy load early this season.  With Bogosian out it is on Big Buff to shoulder much of the workload and provide a significant portion of the offence from the blue line.  So far he has been excellent in providing what the Jets have needed.

Winnipeg Free Press:  Glass returns to ‘Peg as rival.  You always got the impression that Glass preferred anonymity once the game ended.  He will likely find that in Pittsburgh but does give a nod to being part of something special last season. 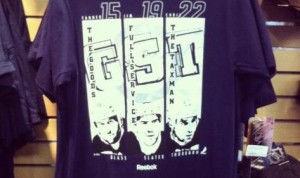 Winnipeg Sun:  Looking forward to seeing old friend Tanner Glass.  It might not be as unlikely as Kirk thinks.  In fact Thorburn and Glass fought back on December 10th, 2009 when Chris played with Atlanta and Tanner was with the Canucks.  Fans declared that Glass was the winner.  So will you be chanting GST if Glass, Slater and Thorburn end up on the ice at the same time? 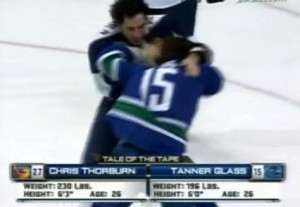 Winnipeg Sun:  Scheifele’s time with Winnipeg Jets growing short.  The writing is on the wall.  If you heard coach Noel’s presser the way he talks about Scheifele it seems pretty clear that after the Islanders game he will be sent back to Barrie.  This is not a condemnation of his game but recognition that there are areas that he still needs to improve upon before he is ready for the NHL.

Winnipeg Sun:  Sidney Crosby making first NHL visit to the MTS Centre and Jets are ready.  For hockey fans who have waited a long time to see Sid the Kid playing at the MTS Centre in an NHL game, they are finally going to get that opportunity.  Of course, the question is what chant will the fans come up with to greet him when he finally gets on the ice?

Winnipeg Sun:  Team defence will be put to the test by Crosby and company.  The most firepower the Jets have faced early this season, we shall see how they fair when up against the likes of Crosby, Malkin, Neal and Letang. 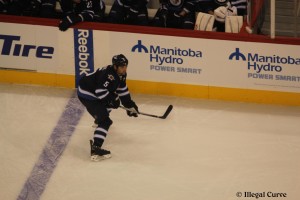 Jets official site:  Jets hit the classroom for Reading Takes Flight.  The Jets are launching “Reading Takes Flight, a program designed to positively encourage children to develop an interest in reading. Jets players will be visiting different schools throughout the city during the month of February to roll out the program”.

Metro:  Manitoba underhanded by allowing Jets a casino says AMC.  Was the Province wrong in the way this was handled?

Illegal Curve:  Coach Noel presser.  His coaching manual.  Look of his lineup.  Wheeler’s game.  Need to move Wheeler to Kane/Jokinen line.  Play of Ron Hainsey.  Play against the Penguins.  Play of Antropov.  (Gushes about Nik).  Planning for Crosby/Malkin.  Play of defence.  Evaluation of Mark Scheifele (not a race to 5.  needs to have better puck control).  Won’t reveal tomorrow’s starter.

IceCaps official site:  Next game vs. Hershey Bears.  The 13th place IceCaps are playing against the 8th place Bears tonight.

– 2012 1st round pick Jacob Trouba and his Wolverine team mates are off to Kalamazoo for games on Friday and Saturday against in-state rival and 9th ranked Western Michigan.

– 2011 3rd round pick Adam Lowry and the Swift Current Broncos have a home double-header, first taking on the Regina Pats tonight and then the Moose Jaw Warriors on Saturday.  Jets fans will be happy to see that Lowry is leading the 5th place (in the Eastern Conference) Broncos in the big stat categories (goals, assists, points) and is 4th overall in the WHL.

Toronto Sun:  Many empty seats at Phoenix Coyotes games.  After making the Western Conference Finals for the first time in franchise history the team was able to follow that up with a 119 day lockout which I’m sure did wonders for continuing any momentum this franchise might have achieved.  It would appear that the writing is on the wall but we shall have to stay tuned to find out as the saga continues.

Globe and Mail:  Social media sing with NHL lockout mood swing.  Could you imagine being required to sift through tweets?  Sounds awful.