Jets news: Fans not planning ditch day for Monday game. No flow for Jets. Pavelec far from razor-sharp. Big Mac sums it up best: Blech. Lockout? What lockout? Toss this one into the trash basket. Fans just glad Jets are back. Defence struggles against Senators. Back to drawing board for Jets. Scheifele passes first test. Jets don’t have time to repeat last year’s performance.

Winnipeg Sun:  Fans not planning ditch day for Monday game.  Fans could stay up-to-date by listening to TSN Radio 1290 broadcast or following @illegalcurve for the latest updates from the game if you cannot tune in yourself.

Winnipeg Free Press:  No flow for Jets.  The game was not what many expected.  Need to change things quickly on this short road trip to Boston and Washington.

Winnipeg Free Press:  Pavelec far from razor-sharp.  Thinking back to the game it didn’t feel like Pavelec wasn’t sharp.  It felt more like his defence let him down.  What do you think?

Winnipeg Free Press:  Big Mac sums it up best:  Blech.  It was ugly.  It played more like a game in mid summer than mid winter.  But both teams were forced to deal with the same conditions so you cannot use that as an excuse.

Winnipeg Free Press:  Lockout? What lockout?  Jets fans spoke of booing Ron Hainsey for his role in the lockout but he was cheered last night when his name was announced.   The True North chant was loud as ever during the anthem.

Winnipeg Free Press:  Toss this one into the trash basket.  It really was a let down.  The Jets are now 0-2 in home openers in their short existence although yesterday’s game they could have easily won if they get a few bounces.

Winnipeg Sun:  Fans just glad Jets are back.  It was an odd atmosphere yesterday.  At some points the building felt electric while at other times it felt like it was a game in mid January and not the home opener.  Still, overall, fans were quite enthused with the return of the Jets. 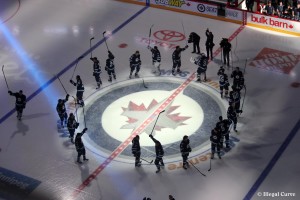 Winnipeg Sun:  Defence struggles against Senators.  It was not a banner day for the Jets defence.  Luckily, coach Noel and his staff took to the road immediately following the game and will work on improving the level of play.  With the multiple mistakes which became either goals or scoring chances, there is plenty of room for improvement.

Winnipeg Sun:  Back to drawing board for Jets.  It wasn’t the type of game you felt either team really deserved to win, but the Jets just couldn’t get it done when they had the chance.

Winnipeg Sun:  Scheifele passes first test.  He bounced around to some different lines and while he continues to show his creativity with the puck, he still needs to increase his strength significantly.

Winnipeg Sun:  Jets don’t have time to repeat last year’s performance.  Jets cannot afford to get into a big hole and with games against tough opponents upcoming that is exactly what this team can be looking at unless they get their act together quickly. 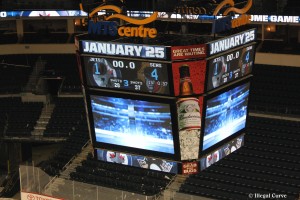 Jets on a Deadline:   A recap of the game, audio, video and the game’s 3 stars.

Jets vs. Senators postgame podcast:  Host Drew Mindell and Analyst Richard Pollock break down the Jets loss to the Senators.

CBC:  Hockey fans celebrate as NHL season launches.  Regardless of the results everyone was happy just to have NHL hockey back on the ice.