NHL news: Rangers, Kings likely to contend as NHL season set to begin. The perils of parity that reign supreme in the NHL. Missing chance to fix draft flaw. Zajac wanted to stay with Devils and live in New Jersey. Duhatschek takes your questions on the NHL season. Know your NHL siren sounds?

Winnipeg Free Press:  Fans and team expecting more as Winnipeg open a short season 2.  What happens if the Jets falter out of the gate?  Will the honeymoon be over?  My guess is fans will put up with a team that isn’t super successful on the ice as long as the effort is present.  It appears they have bought into the long term development message of Chevy & Company and even if they haven’t, they are locked into season tickets for at least another year (following this one) and maybe as many as 2 more following 2013.

Winnipeg Free Press:  Antropov could play in opener and other news and notes.  The Jets could sure use Antropov at the home opener.  While nick-name mania might be spreading, in fact, Ezra Ginsburg of Illegal Curve is the one with actual veto power on any future nicknames for the GST line.  Or should this simply have been a one-year phenomena without attempting to replicate it? Winnipeg Free Press:  A case for better defence.  The Jets goals for was pretty good last season but the team without Bogosian is going to have a tougher time keeping the puck out of their net.  After Buff and Enstrom the pairings are going to be different sans Bogosian.  Can one of the AHL guys make a noticeable difference this season?

Winnipeg Sun:  Eastern European line could score for Jets.  This line might have some pretty good chemistry, which isn’t limited to a shared language.  Antropov and Ponikarovsky played together years ago with the Leafs while Burmistrov and Antropov have been together for the last few years.  Perhaps this familiarity will help the Jets 3rd line have some instant success.  But as Antropov said yesterday, we will have to wait and see what coach Noel decides the lines will be before getting too excited about potential combinations.

Winnipeg Sun:  Jets get tough with enforcer Peluso.  Coach Noel isn’t interested in a guy who is strictly around to goon it up.  He wants someone who can add some toughness to his lineup and give this team some more size.   Here is audio from Peluso that he did with Brendan Burke (Play-by-play broadcaster for the AHL’s Peoria Rivermen.) after he was told he had been claimed by the Jets.

Winnipeg Sun:  Will Mark Scheifele be ready at 19?  It seems that both sides of the question have pros and cons.  If you give him a chance to develop properly in Barrie and then through the Jets system the long term benefits could massive for the Jets.  Or conversely, by putting him back to Barrie you could shatter his confidence and he might never rebound.  If you go the other way and he sticks with the Jets after 5 games, but doesn’t contribute significantly, you might permanently stagnant his development.  Chevy and company have a very tough decision to make with their 2011 first round pick. 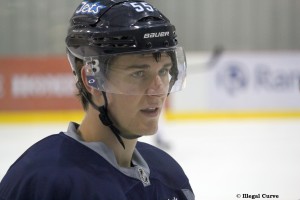 Simcoe.com:  Colts fans wait to hear Scheifele’s fate.  Fans in Barrie are going to have to wait until at least January 27th which will be the 5th game of the season for the Jets and the point at which the team will have to make a decision on Scheifele’s future.

CBC:  Jets could help museum funding shortfall, says official.  This seems like an idea that is going nowhere quickly but who knows perhaps a corporation will lend a public institution some cash to make up for the shortfall.

ESPN:  Jets season preview.  Missed this yesterday.  Burnside doesn’t think the Jets have made many steps forward and is largely predicting that the Jets have not progressed at the same rate as their 4 other Southeast division opponents.  Agree or disagree?

Illegal Curve:  Player audio from the IcePlex.  Following yesterday’s open practice skate at the IcePlex, we have audio from Nik Antropov, Tobias Enstrom and Spencer Machacek. 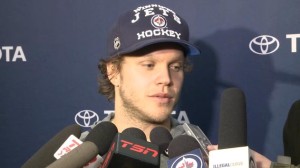 IceCaps official site:  Jets agree to terms with Jason Jaffray.  The veteran captain has been within this (True North) organization for a long time and is seen as an important cog in the wheel for the IceCaps.

Toronto Star:  Rangers, Kings likely to contend as NHL season set to begin.  At least the Kings can try and capitalize on the momentum they built last season when they won the Stanley Cup.  The Rangers had a disappointing 2011-12 and coach Tortorella will be sure to have his talented roster ready to play in this lockout shortened season.

Globe and Mail:  The perils of parity that reign supreme in the NHL.  While I don’t think we will see the Dynasty era that we saw with the Oilers of the 1980s and Red Wings of the 1990s and 2000s, the NHL is probably quite happy to have Stanley Cup champs from major cities like L.A., Boston, Chicago, Pittsburgh and Detroit.

Ottawa Citizen:  NHL misses chance to fix draft flaw.  The Points After Elimination system or “PAE” is an interesting concept that would see that a team that is eliminated from playoffs, isn’t penalized for winning following elimination.  What do you think?  Would you prefer to see this type of system or do you like what the NHL did, which was simply to allow all 14 non-playoff teams a chance to ‘win’ the 1st overall pick.

Star-Ledger:  Zajac wanted to stay with Devils and live in New Jersey.  The Winnipeg product signed himself a nice little contract down in New Jersey.

Globe and Mail:  Duhatschek takes your questions on the NHL season.  And the always informative Duhatschek will be taking our questions when he joins us on Saturday’s Illegal Curve Hockey Show on TSN Radio 1290 as he always does in our season preview show.  Tune in from 7 am until 11 am as the Jets afternoon home opener forces a change to our regular time slot.

CBC:  Know your NHL siren sounds?  A fun little quiz.  Didn’t do too well only recognizing 4 of 7 although after attending all those Jets games last season, at least I was able to pick out that goal horn.