Along with great on-ice success, the Eagles have sold out every game they have ever played on home ice. They hold the minor pro-hockey record for consecutive sell-outs at 311 games, including playoffs.

Winnipeg Free Press:  Local cable providers hope to score TSN Jets.  Have to wonder if Bell is making MTS and Shaw squirm a bit.  Also perhaps they are delaying in hopes that more subscribers to the 2 main providers of cable in this province will jump ship.

Winnipeg Sun:  Fehr fully expects to miss Jets home opener.  It explains his reluctance in taking off his Jets jersey at the jersey reveal on Tuesday.  Hopefully he is ready to go for the Jets as soon as possible. 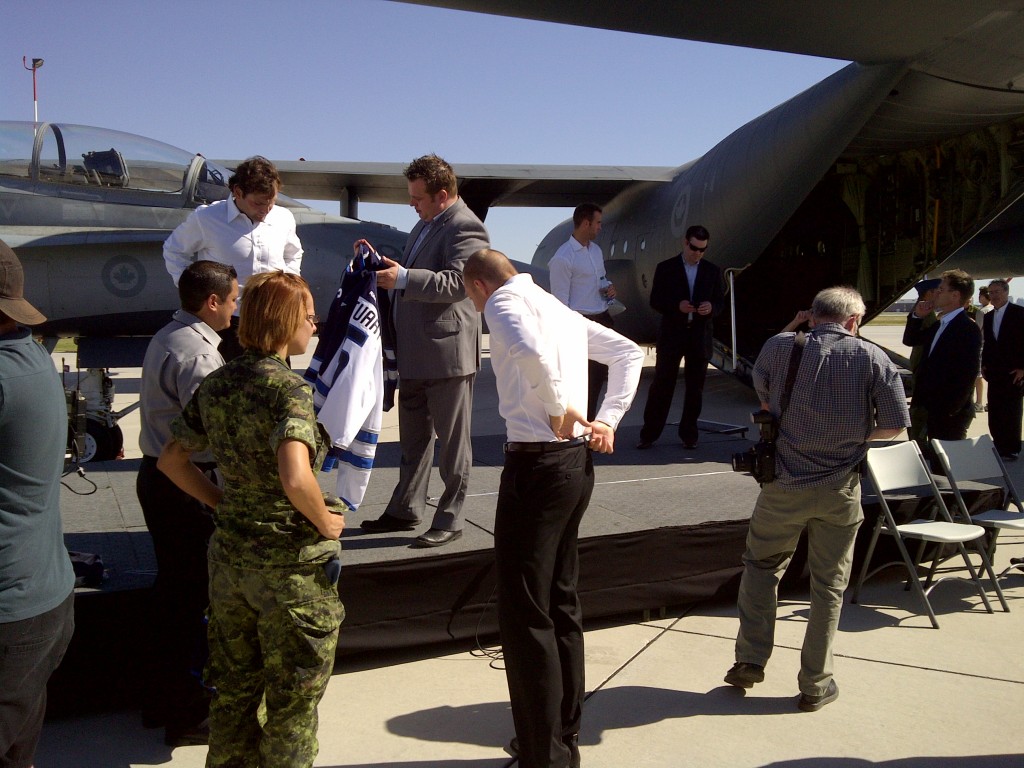 Winnipeg Sun:  Jets counting on Antropov to regain scoring touch.  As I said before I still remember Cherry doing a special on the young, up and coming Leafs prospect and how he was going to do unbelievable things for Toronto.  With him healthy this season, a nice rebound would be exactly what the doctor ordered.

After the jump find out how you can win Jets season tickets/jerseys, a Jet can relate to Crosby’s situation and former Jets players remember coaches killed in KHL crash.  Former Brandon Wheat King Brad McCrimmon remembered and KHL President vows Lokomotiv will rebuild.  In ‘Around the NHL’ news Marty Turco isn’t done yet and why does the NHL still tolerate head shots?

Winnipeg Free Press:  Jets jerseys, tix a Lifestyles draw.  The money goes to a very worthwhile cause and you can win some very good prizes.  It’s a win, win.

Winnipeg Free Press:  Jet can relate to Crosby’s situation.  Another player the Jets can hope will have a bounce back season after  missing the majority of last season.

Winnipeg Sun:  Former players remember coaches killed in KHL crash.  I remember when Igor Koralev was a young, up and coming rookie.  He and all other lost in yesterday’s tragedy will be missed.

The Telegram:  IceCaps hopeful knew coach, players in Russian plane.  He was forced to take to twitter to dismiss rumours that he was on the plane as was incorrectly reported yesterday.

Globe and Mail:  Saying goodbye to Brad McCrimmon.   The former member of the Brandon Wheat Kings will be missed by many.

ESPN:  KHL President vows Lokomotiv will rebuild.  Seems a bit premature to be worrying about this.

Sault Star:  Turco still have the fire.  I think you have to give him a call if you’re looking for a veteran goalie.  He deserves it simply for making the bet with the fan in a game.

Calgary Herald:  Head hits remain despite loss of marquee player.  Too many guys have been lost to not take this seriously.

Greatest Hockey Legends:  Czechoslovakian Air Disaster of 1948.  Joe Pellletier’s site is a must read for those who want to learn more about hockey history.  In this report he details the tragic loss of members of the Czechoslovakian team.