CBA News: NHL’s Tragically Hip dilemma. Do you know where your CBA is? No progress made on player contract issues. Lockout reaching tipping point in infuriation. NHL News: Sakic, Sundin want Quebec City back. Sakic: one of the great ones. Remembering ‘the unselfishness of Sakic’. Oates joins Hull in Hall. 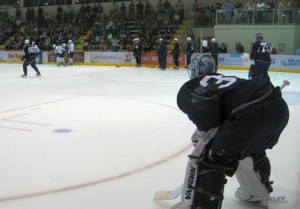 Winnipeg Sun: The NHL’s Tragically Hip dilemma. It sure takes a lot of “courage” for the two sides to go this far without reaching an agreement.

TSN: On day 57, do you know where your CBA is? TSN Insider  Bob McKenzie with the latest CBA update.

The Canadian Press: NHL, union get back to bargaining table, but no progress made on player contract issues. This appears to be the latest snag in CBA discussions. The players don’t want to give back the contract rights they earned in the last CBA and the owners won’t budge on their demands. The classic case of “unstoppable force meets immovable object”.

Denver Post: NHL lockout reaching tipping point in infuriation. It reached that point for me before it even started.

Sportsnet.ca: Peculiar negotiation tactics. Going into the lockout, it appeared that the league and too much at stake for the lockout to last this long. It is still a bit peculiar that they can’t figure this out and get a deal done.

The Canadian Press: Sakic, Sundin want Quebec City back in the NHL. I can pretty much guarantee that it would increase the total pie of HRR.

The Province: Joe Sakic : one of the great ones. Nice to be talking some actual hockey.

The Globe & Mail: Remembering ‘the unselfishness of Joe Sakic’. The number one example is his immediate handing off of the Stanley Cup to Ray Bourque after winning it back in 2001.

St. Louis Post-Dispatch: Oates joins Hull in Hall. Oates recorded 228 of his 1,079 assists with the Blues. Hard to believe the guy went undrafted.

Edmonton Sun: Learning curve for Edmonton Oilers’ young guns. If the lockout lasts the whole season, the OKC Oil Barons could make a run to the Calder Cup on the backs of Hall, Nugent-Hopkins and Eberle.

Edmonton Journal: Inactivity during lockout a bane for most NHL goalies. When (if?) the league returns this year, will there be a difference in performance between the players who have been playing and the ones that haven’t? (Something to consider during fantasy drafts for sure).