Winnipeg Free Press:  Vigier adds variety to practice.  Thrashers fans might appreciate that he wears an Atlanta helmet on his head, keeping that image present in the franchise’s new incarnation. 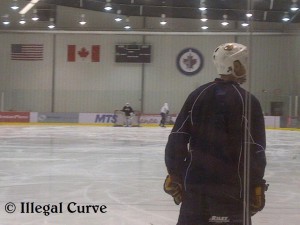 Winnipeg Free Press:  Hoping to knock out the lockout Jets’ ears perking up.  Both Stuart and Ladd are not going to be jumping for joy at the talks so far just yet.  While these are the most sustained conversations between the NHL and NHLPA, some major issues still need to be discussed and compromises found.

CBC:  IceCaps fall as power-play goals boost Monarchs.  It has been a bumpy road for the Jets affiliate as they try and regain the formidable touch they had last season.

Winnipeg Free Press:  Terms of next CBA crucial to future.  Long term viability in this city can be helped with favourable CBA terms.

thescore.com:  NHL, NHLPA meet for 13 hours; will meet again today.  Fans are finally getting the negotiations they deserved to see 3 months ago.  Better late than never, but it will be for naught if both sides don’t compromise.

Globe and Mail:  Lockout optimism softens but dialogue will continue.  Neither side talking to the media is a good thing.  At this point, they both know that they cannot afford to slip up, so they are avoiding same by avoiding the media.  Sure there are some “insiders” on both sides feeding some stories but nothing of significance is on the record.

New York Times:  As NHL talks continue, NBA could aid in solution.  Of the three options it really appears only one is viable for the NHL model.  This one is is similar to what our own Richard Pollock discussed back in July.

ESPN:  Make Whole chatter will determine future.  The players have fought tooth and nail to ensure that the contracts they signed in ‘good faith’ will be honoured and it will be interesting to see how that conversation goes during today’s meetings.

Toronto Star:   NHL lockout has sobering effect on Molson sales.  One of the NHLs premier sponsors is less than pleased with the current state of beer sales in Canada.

CBC:  Huberdeau leads QMJHL to win over Russians in Super Series.  The QMJHL all stars evened the series with a Game 2 win.  The Russians now head to Guelph to play the OHL all stars.  Jets draft choice Mark Scheifele will play in Game 4 on November 12th in Sarnia.

Globe and Mail:  Municipal election gives Coyotes another headache .  So what we know is that absolutely nothing has changed from the status quo in Glendale until these political races are decided.  With the recession continuing folks in hard hit Arizona remain unlikely to spend their tax dollars on the Coyotes.

Illegal Procedure: Winnipeg Blue Bombers Papers. If you are a fan of CFL football, check out our other site, which gives you all the latest Bombers & CFL news.   Bombers CEO wants to talk to you, Palardy had a bittersweet season and talk about Chris Matthews winning CFL East rookie of the year.  Lots of CFL playoff talk as the post season is about to get underway.