CBA news: Sides having ‘frank discussion’ on most important issues. New agreement will get done in spite of Bettman, Fehr. Uncovering the Bettman 8.

Mo Trivia: Who does this starter-Mo belong to?

Winnipeg Sun:  Jets prospect Lowry off to flying start.  As he continues to develop and mature, the Jets are seeing that they have quite a nice selection in Lowry. 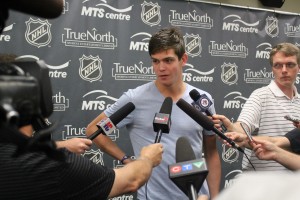 Northern Colorado 5:  Eagles Week In Review.  A look back at the week that was for the Jets ECHL franchise, as well as what they have to look forward to, including their annual Military Appreciation Night on Wednesday, November 7th.

National Post:  Sides having ‘frank discussion’ on most important issues. Basically if either side runs to talk to the media, instead of their usual ‘treat the media like lepers’ then it probably isn’t good news.  However if they continue to negotiate with each other and not in the court of public opinion, then we could be well on our way to seeing a deal done.

Globe and Mail:  New agreement will get done in spite of Bettman, Fehr.  It is a surprise they are able to find a room large enough for all the negotiators as well as the egos of these two gentlemen.

Sportsnet:  Uncovering the Bettman 8.  A very interesting assessment of who the Doves and Hawks might be of the various NHL owners.

CBC:  Top Oilers pick Yakupov scores as Russia too strong for QMJHL stars.  The Russians proved to have too much fire power on this night as they beat up the QMJHL stars 6-2.

National Post:  Majority of Markham council opposes plans for NHL-ready arena.  From what seemed like a forgone conclusion this summer to complete abandonment of support presently, it looks like the arena deal in Southern Ontario has taken a major hit.

Sportsnet:  Don Cherry talks Luongo-to-Toronto prospect.  While the Leafs would kill to get a goalie of his skill level it seems unlikely that Luongo will end up becoming a Maple Leaf.

Illegal Procedure: Winnipeg Blue Bombers Papers. If you are a fan of CFL football, check out our other site, which gives you all the latest Bombers & CFL news.   The Province and Bombers team up to fight domestic violence, giving out grades for the Bombers this season and reflecting on the season that was.