Red Bull Salzburg official site:  Tobias Enstrom signs with Red Bulls.  Will this give him wings?  (Couldn’t resist).  Instead of taking off with Modo of the Swedish Elite League, the Jets blueliner is off to join the Red Bulls of the Austrian hockey league. 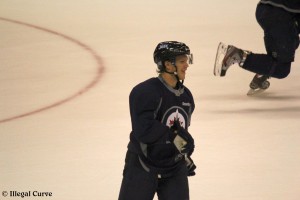 The Telegram:  Bumps and bruises have ‘Caps on ice.  The season is young and already the Caps are being forced to deal with lineup changes.

Reporter Herald:  Ice cold start for Colorado Eagles.  The Eagles have too many players on the roster and it shows as the lack of cohesion in the unit has the team off to a 1-3-1 start.

Globe and Mail:  Nashville’s Kostitsyn hopes lockout wipes out NHL season.  Regardless of whether or not the lockout continues, it would appear that some players are better off staying on the other side of the pond.

Globe and Mail:  Time for the moderates to step forward in NHL dispute.  The irony is that hockey, as in regular life, allows those extreme elements (those who speak the loudest) to have the biggest voice.  It is past time the moderates took control on both sides of this battle and get a deal done.

Pittsburgh Post-Gazette:  Lockout could chill hockey’s future in warm markets.  It seems like every time the NHL gets ahead down south, something happens to put the breaks on that growth and a protracted lockout can only arrest this development.

ESPN:  Deal has to be struck this week.  Fans need to let both sides hear it from them.  Apathy can only result in both the NHL and NHLPA assuming they can do whatever they’d like and the fans will follow like sheep.  Social media (like twitter) has given fans a voice they never had previously and they need to hammer both sides to let them know exactly how you feel as the time for a deal gets shorter and shorter.

Montreal Gazette:  Honour is missing in NHL labour talks.  Hickey is absolutely right.  The NHL and owners need to ensure that the ‘make whole’ provision is part of any future deal.  You signed the contracts in ‘good faith’ and as such need to fulfill the obligations these deals entail.

CTV News:  NHL tough guy charged after Toronto bar fight.  Well if you cannot fight on the ice, it is socially acceptable to fight in a bar, right?

Globe and Mail:  Amid stoppage in NHL play, it’s time to reflect.  Roy MacGregor looks at the many changes to the face of hockey over the past 40 years.

Illegal Procedure: Winnipeg Blue Bombers Papers. If you are a fan of CFL football, check out our other site, which gives you all the latest Bombers & CFL news.  Good news Blue fans, Winnipeg can still make the playoffs and the math is quite simple.  Bombers need to win out and have Eskimos lose out.