Note:  Tune into the Illegal Curve Hockey Show tomorrow from noon to 3 pm as the guys have 3 hours of hockey talk on TSN Radio 1290.  Guests:  Scott Burnside (ESPN). Norman O’Reilly (Professor of Sports Business at U of Ottawa).

Winnipeg Free Press:  Jaffray will wear the captain’s ‘C’ for IceCaps.  A worthy recipient of the ‘C’.

Winnipeg Free Press:  Polar bears replace games.   Fans in this city and many others across North America have no fear to let both sides know how they feel, although many will do so in a polite manner.  It is a shame that the Jets are locked out as I suspect that Jets TV would love to be filming Slater doing his next “Take a Jet to work” segment in Churchill. 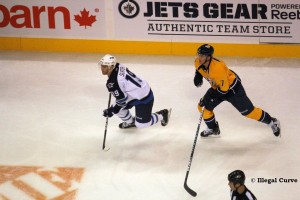 Winnipeg Sun: Players hold no hard feelings against Chipman.  Seen as an owner the players can relate to, the Jets players bear no ill will towards their usual employer.

The Telegram:  Playing with an edge.  The rugged Cormier was finally able to get in most of last season as he stayed healthy for the 2011-12 season.

Winnipeg Sun: Hat tipping WHA Jets founder Hatskin.  One of the reasons fans are able to enjoy the Jets 2.0 is thanks to the vision of an individual like Ben Hatskin.

Winnipeg Sun:  No rush to honour Jets alumni.  It is a tough predicament for True North.  On one hand they understand that for many Jets fans in this city, the 15 year departure and absence of the Jets was like hitting a pause button.  However on the other hand, how can you ignore the fact that the Jets 1.0 and Jets 2.0 are two different franchises?

Toronto Star:  Nothing in this fight for the fans or the game.  I suspect fans will flock back despite the bitterness they feel towards both sides.  Despite being taken for granted, fans ultimately will want to be back in arenas cheering on their team as soon as the lockout ends.

Globe and Mail:  NHL and players’ association talk again, but avoid core economic issues.  People keep holding this secondary talk up as a victory.  While it is important to discuss non-core issues and hopefully resolve them at the same time, the big ones are what is going to get this process moving.

Montreal Gazette:  NHL exhibition game entertains – crowd sparse. Fans don’t want to watch a side-show.  They want the real deal and shouldn’t have to settle for anything less.

Chicago Tribune:  NHL killing itself with needless lockout. Worth reading for the ‘Wirtz-case scenario’ pun alone.

Toronto Sun:  Today’s NHL players don’t know how good they have it says Leafs great.  Players often talk about taking care of those players who are coming to the NHL, but you wonder why there is not more attention given to those who blazed the trails that today’s players benefit from.

USA Today:  Did NHL’s interference force reporter’s job change?  If he was a team employee than regardless of any editorial freedom he was granted, I cannot see how he would be able to publish NHL related content on the Kings site.

Columbus Dispatch:  Pursuit of Davidson continues.  The Blue Jackets are in desperate need of some solid upper management to get this franchise on track.  The pursuit of Davidson has been ongoing for quite some time and it appears likely that J.D. will be heading to Ohio after his employment in Missouri.

Illegal Procedure: Winnipeg Blue Bombers Papers. If you are a fan of CFL football, check out our other site, which gives you all the latest Bombers news.  The Bombers prepare to battle the visiting Stampeders as they cling to the hope of the post season.