CBA news: Starting small could be key to solving NHL lockout. A day-by-day look at the NHL lockout. The KHL could be coming to Canadian TV. Veterans of the labour wars.

Winnipeg Sun:  Byfuglien says trial was ‘pain in the ass’.   Big Buff wants to play and fans want to see him skating at the MTS Centre and not back in Minneapolis.  Sounds like he is ready to go.

Winnipeg Free Press:  Locked-out Jets still hoping.  It appears most players remain as ‘in the dark’ as the fans as to when NHL hockey might resume this year.

Winnipeg Free Press:  School, hockey are a good fit.  Giving underprivileged youth an opportunity to play hockey is a very good thing.  As we’ve featured above, the Pass it Forward program gives people with old equipment the opportunity to help out kids as well.  If you have hockey equipment you are no longer using, why not drop it off at any Perths location to give kids who could really use it.

Note: These Winnipeg Sun links are older but because we missed doing the papers yesterday we didn’t get a chance to feature them.

Winnipeg Sun:  Lockout ‘tough’ for Jets’ Wheeler.  Hopefully it won’t be tough for too much longer.

Winnipeg Sun: Wheeler hopes to hit the next level.  He elevated his game last season and there  are many that think he can continue to hit higher targets next season. 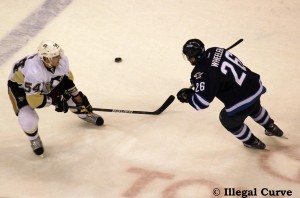 Winnipeg Sun:  Wheeler set for fatherhood.  Like to see that he is thinking of the Jets in 20 years time.  Hopefully after he has won multiple Stanley Cups with the team.


Winnipeg Sun:  Meeting with Jets coach Noel turned Wheeler’s season around.  Coach Noel was firm with his players but in Wheelers case that had the intended impact.

Winnipeg Free Press:  Jets hockey academy begins second season.  Gives kids who might not otherwise have an opportunity the chance to try hockey.

ESPN:  Power Rankings.  Missed this the other day.  Jets are spotted in 29th in the rankings to start the season.  Fair or foul?

National Post:  Starting small could be key to solving NHL lockout.  Perhaps this could be seen as a positive step, but until they really begin to tackle the contentious issues, their really is no reason for optimism for fans.

USA Today:  A day-by-day look at the NHL lockout.  A nice, yet frustrating, summary of the last couple of weeks as the NHL and NHLPA continue to drag out this process.

Toronto Sun:  The KHL could be coming to Canadian TV.  At least fans of particular players would be able to watch them playing hockey, even if it is not NHL.

Globe and Mail:  Veterans of the labour wars.  A couple of guys who are nearing the end of their careers with a pragmatic approach to this lockout and what it might take to get back to the business of playing hockey.

Edmonton Journal:  Paperwork benches Yakupov again.  You would think that it would be well understood what requirements are in place for players to play overseas.  Will be interesting to see what Sarnia decides to do about this situation.

The Seattle Times:  Sounders majority owner Joe Roth talks stadiums, sponsors, and NBA/NHL possibilities.  Time and time again, hockey is always mentioned as an afterthought.  While they wouldn’t mind having it in addition to the NBA, it is clear that the city of Seattle is solely focused on bringing the NBA back to their city.

Montreal Gazette:  High taxes a hurdle for NHL free agents.  As the agents quoted in the article suggest, it is clearly a factor but perhaps not as big as whether or not the Canadiens have a good chance to win the Cup.  That likelihood would probably offset the downside of paying more in taxes.

Illegal Procedure: Winnipeg Blue Bombers Papers. If you are a fan of CFL football, check out our other site, which gives you all the latest Bombers news.  The Argos are coming to town for Saturday’s contest and the Bombers are ready to start a win streak.