Jets news: Slater works out with Jets teammates while waiting for lockout to end.

Winnipeg Free Press:  Slater works out with Jets teammates while waiting for lockout to end.   Slater joins his teammates still skating at the MTS Centre.

Boston Herald:  Key to lockout cannot be found.  More and more people are starting to talk full year lockout and that should have fans very worried about the prospect of losing another entire NHL season. 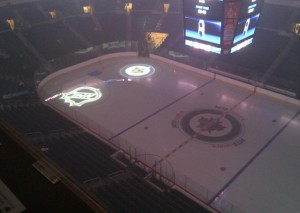 Denver Post:  Gary Bettman doesn’t deserve all blame for NHL lockout.  While he is a lightning rod for criticism, the point is he is doing the work that he is paid to do on behalf of his 30 employers.

KSDK:  Blues equipment manager takes on new job during NHL lockout.  To meet one of the true victims of this lockout, here is exhibit A.

Pittsburgh Post-Gazette:  Unity a key for locked-out players.  Until the players start missing pay periods you should not expect any break in the current projected unity of the union.

Globe and Mail:  Cattle crossing offers Gary Bettman a timely diversion from NHL lockout.  Does Martin Havlat really think that fans are going to cry for him because the owners called him a name and have said worse?  Really?  Players need to focus on the negotiations because trying to align yourself with fans is just the wrong way to play this.  Hockey fans can see right through this transparent move.

Globe and Mail:  NHL needs to acknowledge the ‘hoser effect’.  And this is why the players are right in asking why they should save the NHL from themselves?  Instead of trying to prop up failing teams in markets that are ill equipped for them, why not move the franchise(s) to more viable areas (i.e. Southern Ontario, Quebec, etc.) where an increase in revenue is inevitable.

Part 1:  Evander Kane signs with the Winnipeg jets.  Interview with Randy Turner of the Winnipeg Free Press.  Revenue sharing in the NHL and how a franchise qualifies.  HRR and the dispute between the NHL and NHLPA regarding how it is calculated.

Part 2:  Please note, due to the NHL Lockout and the lack of negotiations between the NHL and the NHLPA this week’s Illegal Curve Hockey featured football and baseball discussion in hours two and three.

Illegal Procedure: Winnipeg Blue Bombers Papers. If you are a fan of CFL football, check out our other site, which gives you all the latest Bombers news.  The Bombers prepare to try and start a win streak as they get ready to play the Argonauts next week.