Winnipeg Free Press:  Looking around in downtime.  If you notice, a number of players are heading to cities where they either have previously lived or have some ties so they are not forced to start from scratch.

Winnipeg Free Press:  Pre-season wipeout costs fans 4 games.  Well Jets fans, time to start calculating your interest as the first 2 home games of the pre-season have been cancelled.  In addition to those games, for those planning a road trip to Saskatoon, you might want to put those plans on hold as that game was also cancelled.

Winnipeg Free Press:  AHL happy to pick up lockout slack.  Of course this means that the bottom tier AHL players will likely lose jobs or be forced to the ECHL so this process is not without cost.

Winnipeg Sun:  Antropov joins KHL’s Barys Astana.  As we discussed yesterday, Antropov will be heading to his native Kazakhstan to play in the KHL. 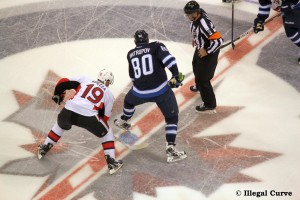 TSN: How will the Jets line up after the lockout?  Dennis Beyak offers up his thoughts on the way the Jets lines might look next season and he rightly adds in a rant about the true victims in this lockout.

Angus Certified: Top 50 NHL trade value rankings. Just one Jet player made the list at #24. Any guesses as to who that was?

TSN:  No CBA meetings planned as both sides head to labour hearing.  Both sides really showing that commitment to “urgency”, not.

Montreal Gazette:  Fans express NHL lockout frustration.  The beauty of a lockout in 2012 is that fans have a voice.  Either message boards, commenting on sites, via twitter, the message is being spread across North America that fans are fed up.

TSN:  Work reduction for NHL staff, preseason games cancelled.  The true victims of the NHL lockout are the workers who are either being laid off or put on a reduced schedule by either the NHL or the teams.  If fans are looking to give anyone sympathy, it should be these people, not the owners or the players.

Edmonton Journal:  NHL officials stuck in limbo during lockout.  Another group that will lose out big time are the refs.  Depending on how long this lockout goes, wonder if the hard line players leading the charge will receive a few more penalties next season.

Globe and Mail:  Youngsters front and centre in players PR campaign.  These young guns have a lot more invested in these CBA negotiations than older players nearing the end of a career.  They would still be well advised to stay off twitter during this time.  These “us” (lumping the players with fans vs. owners) tweets are quite transparent.

USA Today:  Ovechkin, Datsyuk, Bryzgalov, Spezza sign in Europe.  Another wave of big names head over to Europe as the lockout drags on.

TSN:  OHL targetting fighters; NHL targetting embellishers.  The NHL would be well served to crack down on players who embellish.  Nothing worse than watching a guy act like he got shot, only to draw a penalty and then miraculously show up on that same power play.

Arizona Republic:  Three budget scenarios laid out for Glendale.  Looks like the city of Glendale is down to its last 3 strikes.  Of course it seems like every year they are down to their last out and manage to get that clutch hit to send the game to extras.

Illegal Procedure: Winnipeg Blue Bombers Papers. If you are a fan of CFL football, check out our other site, which gives you all the latest Bombers news. What can the Bombers do to get back on track?

Illegal Procedure: Laughing During a Funeral. How will the Bomber brass react to the mirth players showed on the bench?