Jets news: NHL cancels preseason games in September. How will the Jets line up after the lockout? Top 50 NHL trade value rankings. Top 100 NHL prospects. Players strive to keep in practice as lockout continues. Antropov Set to Join Barys in KHL. No panic yet, local veteran Little says of NHL lockout. Burmistrov accepts what he hopes is a minor detour to St. John’s.

Jets official site:  NHL cancels preseason games in September.  A total of 4 Jets games are lost, including the Saskatoon game against the Bruins.  With the owners losing these games, you have to wonder what the players will lose down the line.

TSN:  How will the Jets line up after the lockout?  Good friend to Illegal Curve Dennis Beyak offers up his thoughts on the way the Jets lines might look next season and he rightly adds in a rant about the true victims in this lockout.

Angus Certified:  Top 50 NHL trade value rankings.  Just one Jet player made the list at #24.  Any guesses as to who that was?

Winnipeg Free Press:  Players strive to keep in practiceas lockout continues.  Tim Campbell with the latest from the IcePlex this morning.

R-Sport:  Antropov set to join Barys in KHL.  Looks like another member of the team is heading over to play in the KHL as according to this report, Antropov is set to return to his native Kazakhstan.

Waterloo Record:  No panic yet, local veteran Little says of NHL lockout.  Bryan Little is attempting to remain optimistic but as the lockout stretches from days to weeks, it will be interesting to see if that changes. 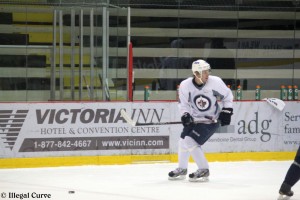 The Telegram:  Burmistrov accepts what he hopes is a minor detour to St. John’s.  About the only good that can come from a lockout is the development of some players.

ESPN:  AHL cautious about lockout boost.  One of the biggest beneficiaries of this lockout will be the minor development league, which will give its fans an opportunity to see NHL ready talent, playing for teams like Oklahoma, St. John’s, Syracuse, etc.

Philadelphia Inquirer: After 3 days, no change in NHL lockout.  Enough with the posturing.  Both sides are losing in the court of public opinion and need to switch their focus to getting a resolution that is somewhat palatable to each side.

New York Post:  Locked-out NHL players might hold own games.  Just a terrific idea (sarcasm).  Personally I think the players are better than this type of traveling All-Star game but if they think it is in their best interest, then they will likely give it a go.

Globe and Mail:  A lost NHL season could happen again.  The majority of voices talking these days about the possibility of resolution seem to be overwhelmingly pessimistic at the prospect of a short term lockout.  Again both sides need to give; owners by perhaps removing deadbeat franchises and the players yielding their 57%.

ESPN:  Player opinions vary on 2004-05 lockout.  Interesting to hear from someone like Modano about the actual costs he suffered as a result of that lockout.

Globe and Mail:  Tohono O’Odham tribe emerges as key player in Coyotes sale.  If you are Shane Doan are you reconsidering your contract as it does not appear that anything is even close to finalized in Phoenix.

Edmonton Journal:  City no longer knows want Oilers owner wants.  What seemed like a done deal is quickly going south as the City of Champions doesn’t have their new downtown arena just yet.

Illegal Procedure: Winnipeg Blue Bombers Papers. If you are a fan of CFL football, check out our other site, which gives you all the latest Bombers news.  What can the Bombers do to get back on track?

Illegal Procedure:  Laughing During a Funeral.   How will the Bomber brass react to the mirth players showed on the bench?