Jets official Site:  Jets agree to terms with Spencer Machacek.  Machcaek, who was a RFA is 23 years old, had 2 goals and 7 assists for 9 points in 13 games with the Jets last year.  Has played 25 career NHL games.

Winnipeg Free Press:  Fifteen years, then this?  It seems unreal that after a 15 years drought, followed by one of the most amazing year’s this city will ever see, that the league might go dark again.  The only “positive” is that expectations are a short lock out.

Winnipeg Free Press:  Kane signs with Jets fans.  Cannot say I am overly surprised that Kane is not sharing his thoughts with the local media on his contract status.  It doesn’t appear likely that anything is getting done this week.

Winnipeg Free Press:  Jets use off-season to keep their edge.  Preparation in today’s NHL is a lot different than when guys showed up and used training camp to get into shape.  Generally most guys get a little time off in the summer before they have to re-dedicate themselves to getting into game shape.

Winnipeg Sun:  NHLPA is unified as lockout nears- Ladd.  It is like saying that fasting is no big deal before you begin to fast.  Sure it is easy to start but go a few hours or 12 without water and you start to sing a different tune.  What will players be like once payroll cheques start going away?  Will they then be as unified? 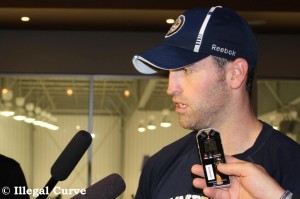 Winnipeg Sun:  Bogosian injury leaves huge void. It is an opportunity for one of the younger players to step up but the loss of Bogosian on the blueline cannot be understated.

Winnipeg Sun:  Jets players mull playing alternatives.  While you’d prefer to hear the players are throwing all their effort into getting a deal done, it is only prudent for them to search for alternative sources of revenue if the lockout occurs.

Prince Albert Daily Herald:  Manson dedicates a lot of time to help those in need.  If you ever wonder what became of the Jets 1.0 defenceman with the booming shot, here is an update.

Globe and Mail:  NHL enters final days under current CBA.  And based on the language/rhetoric we are hearing from both sides you can get ready for a lengthy battle.

TSN:  Fear, loathing and ‘I can’t believe we’re doing this again’.  Bob McKenzie with a must read column. Of course after reading it, are you for the players, the owners or neither?

NorthJersey.com:  Duped fans should put NHL on ice for good.  There is no indication that the NHL or NHLPA have a higher regard for fans this time around.  Both sides are trying whatever they can to align themselves with fans as if they have a collective interest in the process.

Seattle Times: Favorable, innovative arena deal a boon for Seattle.  The NHL would really just be an extra bonus in this story of Seattle doing whatever it takes to regain NBA basketball.  However if NHL commissioner Bettman is looking for a little more Pacific coast representation, if the league ever needs to relocate a franchise, I’m sure Hansen and company would be willing to listen.

Toronto Sun: Brian Buke rips ESPN over Franchise Rankings.  The manner in which the rankings were done seemed, to quote Seinfeld’s Cosmo Kramer “arbitrary and capricious”.  Good news for fans is that it allowed Brian Burke to finally direct the frustration he must be experiencing, at ESPN.

Illegal Procedure: Winnipeg Blue Bombers Papers. If you are a fan of CFL football, check out our other site, which gives you all the latest Bombers news. Plenty of news following the disastrous Banjo Bowl contest.  After being swept in the home and home series with arch-rival Saskatchewan, can the Bombers salvage the season?

Illegal Procedure:  A Season on the Brink- Burke’s Blunder.  To punt or not to punt, that was the question.