Note: The Jets got off to a slow start on Sunday but eventually got things going scoring five straight times to take it 5-2 over the Ducks. No word if Jets fan Daniel Howard was personally responsible for the win with his duck calls (with Nintendo modified version here) during the game. The Jets are off today. Next up will be Paul Maurice and the Florida Panthers on Tuesday.

Note II: The Moose are scheduled to practice today as they’ve got a few days of practice scheduled here in Winnipeg before they head out on the road for four games starting in Abbotsford.

Note III: The Ice split the first pair of games of their four-game homestand, opening with a loss to the Broncos (4-3) and then securing a win against the Raiders (6-4). They will now prepare conclude the homestand this upcoming weekend against the Chiefs on Friday and then conclude it against the Pats on Sunday.

Note IV: It was battle of Jets prospects as Michigan took on Wisconsin on Saturday night with 2022 1st rounder Rutger McGroarty beat 2018 6th rounder Jared Moe with this one-timer. Moe did make a nice stop on projected top 5 pick in the 2023 draft Adam Fantilli.

The Athletic Winnipeg: Jets’ comeback win over Ducks: What we learned about Rick Bowness, Dylan Samberg and more. (Paywall). Murat with some reactions to the game, the symbolism of the Samberg goal and an inspiring story at the conclusion about a son’s final gift to his mom.

Global News: Jets a prime example of how the mood can change around a team. While the Jets have done well to this point in the season they are not nearly comfortable enough to rest on their laurels.

Sportsnet: What comeback? Jets’ Bowness is fed up with first period malaise. Hard to understand how a team that knew they needed to bounce back after a poor effort on Friday put forth the effort they did in the opening period of play on Sunday.

Winnipeg Sun: Jets overcome another slow start to down Ducks. The Jets talent may allow that to work against a weak opponent but that sort of lack of readiness would have them far behind the 8 ball against an upper echelon team. And if not for this save by Connor Hellebuyck on former Jets Dman Nathan Beaulieu it could have been a pretty different game. 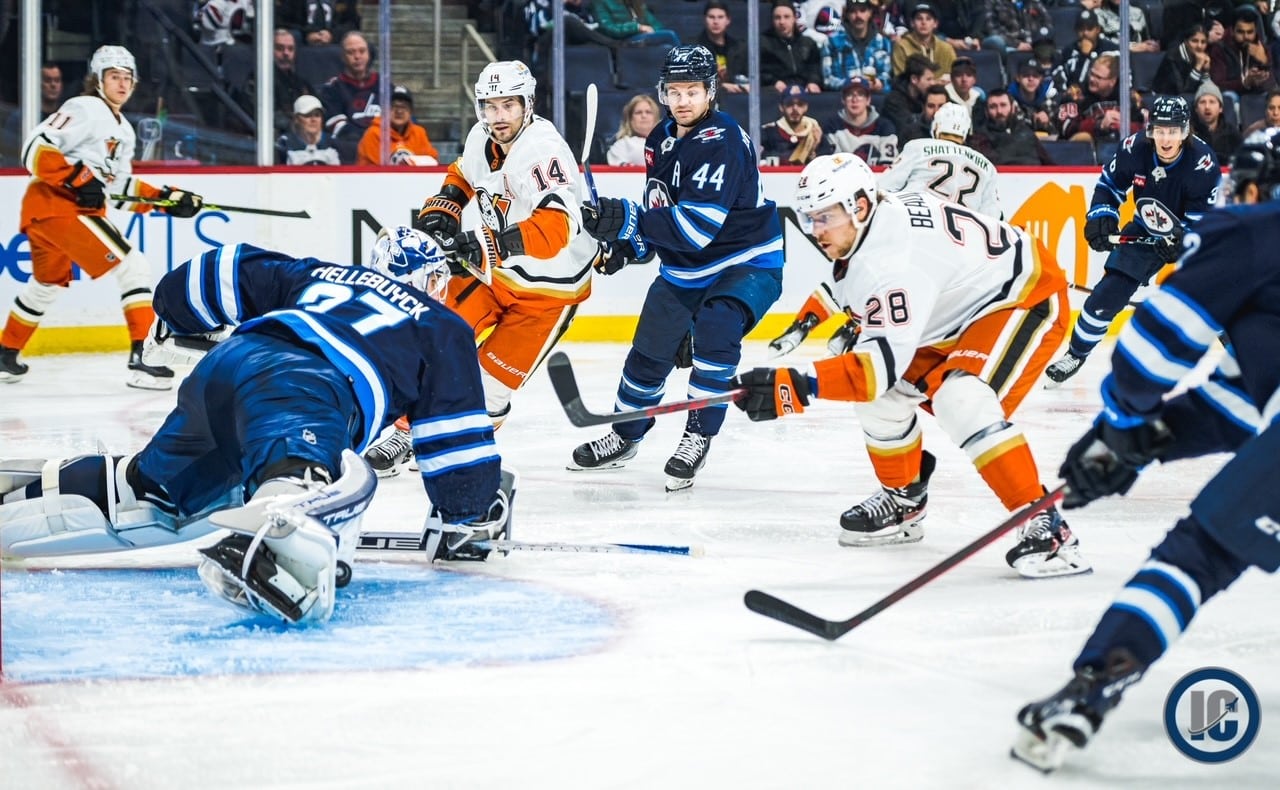 Winnipeg Sun: Jets keep winning, but sluggish starts need attention. The fact is this team sits 2nd in the Central and 4th overall in the Western Conference. But they are just five points up on 9th place Nashville so they’ll need to get their starts figured out so they can continue to put points in the standings bank.

Winnipeg Free Press: Mikey Eyssimont: Man or myth? (Paywall). Whenever the subject came up when speaking with Mikey in the AHL he was consistent in saying he saw an opportunity in Winnipeg for him to play in the NHL. And as we talk about a lot with players on the Moose when they get that opportunity they need to seize it and that is just what Eyssimont is doing right now with the Jets.

Orange County Register: Ducks lose to Winnipeg, complete road trip without a victory. The Jets opponent are mired in a tough stretch.

Sportsnet: ‘I’m not a babysitter’: Bowness frustrated with Jets’ slow start despite comeback win. Jets head coach Rick Bowness explains his anger towards his players in the first period, says he is still trying to figure out this team, which is a long process.

Illegal Curve Hockey Show: Saturday Podcast. On the show this weekend we discussed the Jets/Jackets game. Struggles on the power play. Finding a winger for the Dubois/Connor line. Return of Paul Maurice to Winnipeg/his legacy. Previewing the Jets/Ducks and Jets/Panthers game.