Note: Before the puck had even dropped between the Jets and Pens there was some big news following morning skate on Saturday with head coach Rick Bowness advising that Nikolaj Ehlers would require sports hernia surgery and while there is no timetable for his return, the expectation is he will play again this season. Additionally, Bowness advised that defenceman Dylan DeMelo is dealing with an upper-body injury but they are hoping he will be back on Monday.

Note II: Once the puck did drop on the game between Winnipeg and Pittsburgh it settled into a bit of a slog and it appeared that whomever scored first would win the game. The visitors did just that 53 seconds into the 3rd period and added two empty netters to take it 3-0. The Jets are scheduled to practice today at 12 noon. Stay tuned for the Practice Report.

Note III: Moose got the start on time memo with three goals (Meireles | Bongiovanni | Limoges |) in first 4:22 of the 1st period. But the Stars woke up and tied the game 3-3 leading to a shootout. Big Bad Brad Lambert scored a nifty one to tie it in the skills competition and newly recalled Isaac Johnson provided the shootout winner. Manitoba are now 8-3-2 on the season which puts then 2nd in the Central. Next opponent will be the Admirals on Tuesday in Milwaukee who sit in 1st.

Note IV: The Ice picked up their league leading 20th win of the season in a 5-2 win on Saturday night over the Pats here in Winnipeg. It was their 15th straight victory which is incredible. They are 20-1-0-0 on the season. They are next in action on Tuesday when they welcome Lethbridge to town.

Note V: Good luck to the Winnipeg Blue Bombers who are going for their third straight Grey Cup championship in Regina today at 5 PM CST.

Steinback Online: Memorable night for Ste. Anne hockey fans, meeting up with Jets Hall of Famers. What a great experience for him and to be able to share it with his son will be something that will last the two of them a lifetime.

Winnipeg Sun: Penguins shut out Jets at home. Scott recaps the action from his spot inside Canada Life.

Winnipeg Sun: Jets’ speedster Ehlers halted by sports hernia surgery. The results of the game were almost secondary after the team got dealt a big blow earlier in the day.

Winnipeg Free Press: Jets lost this one due to screwups. (Paywall). Check out Mike’s thoughts on the game.

Winnipeg Free Press: Ehlers going under knife. (Paywall). It was like the Jets suffered two losses on Saturday.

Pittsburgh Post-Gazette: Tristan Jarry shines in Penguins’ shutout win over Jets. Always interesting to read the recap from a writer that covers the Jets opponent. 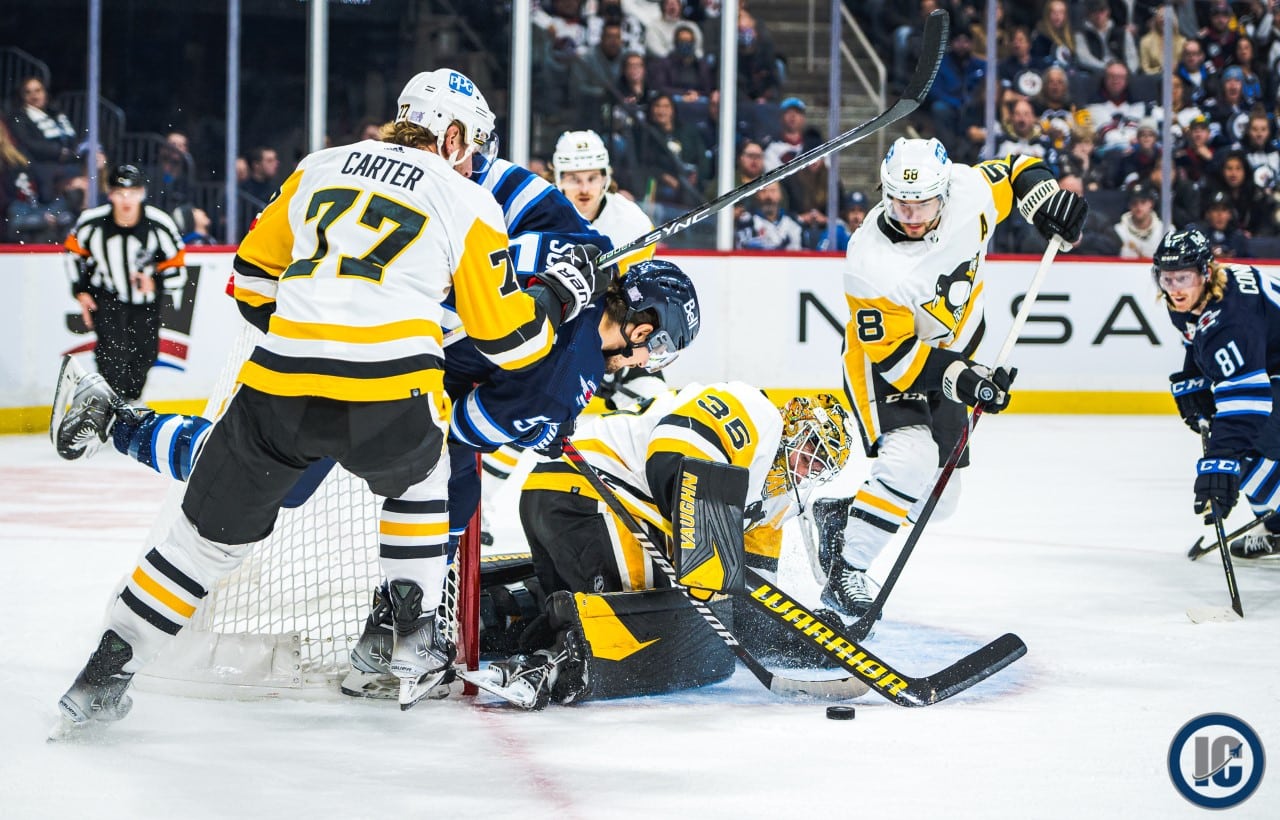 The Athletic Winnipeg: Nikolaj Ehlers to undergo sports hernia surgery: Will Winnipeg make a trade to fill in? (Paywall). Now that the question about Ehlers health has been answered the next question is what do the Jets do to offset this?

NHL Tonight: Chat with Kyle Connor. He discussed the Jets’ strong start to their season, having a new head coach and more.

Illegal Curve Hockey: Saturday Podcast. Topics discussed on the show depending on Ehlers status will Jets maintain status quo or make a trade? The Jets having the lowest goals allowed in the NHL. Collective team defence. Play of Connor Hellebuyck this season (2nd best GSAx in NHL). Previewing Jets/Pens. Look at the Moose and Ice. End show with breaking news that Nikolaj Ehlers will require sports hernia surgery.

Illegal Curve Hockey: Chat with Conor Geekie. On yesterday’s Illegal Curve Hockey Show we were joined by Winnipeg Ice centre Conor Geekie who is from Strathclair, Manitoba. Geekie was taken in the first round (11th overall) by the Coyotes this past summer.  He joined us to talk about his season, the play of his 19-1-0-0 Ice club, his teammates and more.