Note: The Jets were looking to go a perfect three for three on their road trip which would have meant four wins in a row but that wasn’t going to be an easy task given that they were going up against a very good Golden Knights team in Vegas. If it wasn’t for the otherworldly efforts of goalie Connor Hellebuyck there is no chance Winnipeg would have escaped with any points, let alone one (and they could have easily had two) after number 37 kept his team in the game up until there was just six seconds left in OT and Jack Eichel ended it. It is believed the team will be off today and resume skating on Tuesday as they prepare for the Habs on Thursday in Winnipeg.

Note II: There was an update following the game in Vegas from associate coach Scott Arniel on the status of Nikolaj Ehlers, Logan Stanley and head coach Rick Bowness.

Note III: The Moose were looking to bounce back after a 5-2 loss on Saturday which arrested their four-game win streak. It got off to an inauspicious start when Kristian Reichel inadvertently scored an own goal after a Moose faceoff win in their zone. However, that was all Arvid Holm would give up as he made 33 saves, the special teams were special (PP: 2/4, PK: 5/5) and they went on to win 4-1. They got goals from Cole Maier, Leon Gawanke, Cole Maier and Wyatt Bongiovanni and although Jansen Harkins goal streak ended at five straight games, he picked up an assist to give him 5G 4A in six games as he continues to try to work his way back to the NHL. The team is off today.

Note IV: The Ice sit 13-1-0-0 on the season which is good enough for a tie with Red Deer for 1st in the Eastern Conference. The 8-4-0 Everett Silvertips are in town on Tuesday as the homestand continues for Winnipeg at Wayne Fleming Arena.

Global News: More treats than tricks for Winnipeg Jets in October. I am not sure how many folks had the Jets tied for 1st place when October concluded and while that is just 8-10 games into the season for most teams it has shown that the team has something cooking with their 4th line for the first time in years, that Mark Scheifele has come to play and Connor Hellebuyck continues to be the team MVP.  And the positive for fans is that while there is still PLENTY to be cleaned up the local NHL club have put themselves in good spot while attempting to adapt to the systems of Rick Bowness.

Sportsnet: Jets not at par with their own standards in OT loss to Golden Knights. That headline should be amended to say “Jets (except Connor Hellebuyck and the 4th line)..” because aside from those four (although it’s interesting that associate coach Scott Arniel included the 3rd line in his post-game comments as notable) the rest didn’t seem ready to roll when puck dropped.

Winnipeg Sun: Jets weather another slow start but ultimately fall to Golden Knights in overtime. It would have been Grand Larceny if the Jets had escaped Nevada with two points given their performance for 64 minutes and 54 seconds of that game and the police would be looking to lock up Connor Hellebuyck given, he orchestrated that robbery. 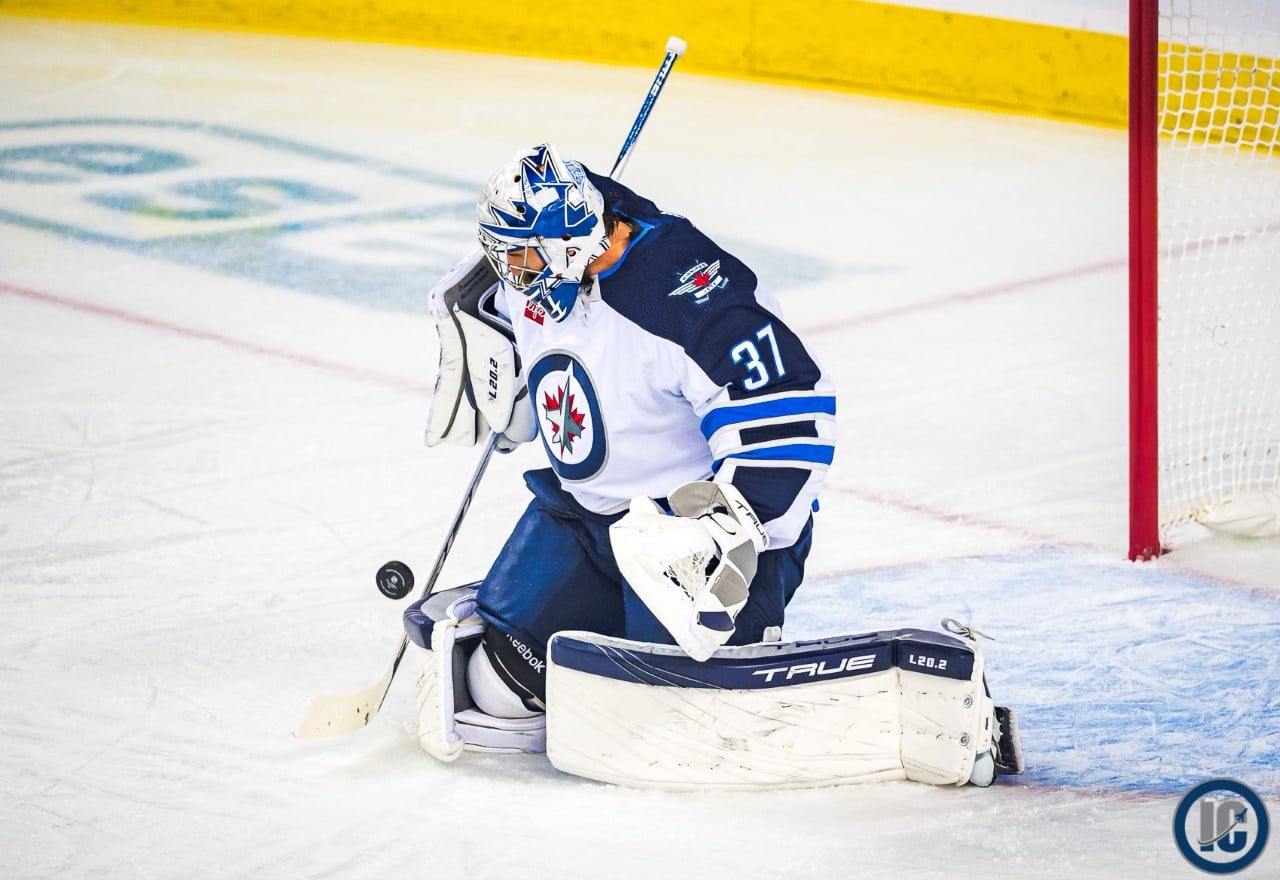 Winnipeg Free Press: Jets run out of luck in Vegas. (Paywall). Jeff was in Nevada and filed this report from T-Mobile Arena.

Las Vegas Review Journal: Jack Eichel’s overtime heroics lift Knights past Jets. Read about the contest from last night from the perspective of a writer that covers the home team.

TSN: Hellebuyck stands on his head to salvage a point for Jets. Jets on TSN commentator Kevin Sawyer weighed in on the magnificent performance by Connor Hellebuyck, who made 46 saves to help the Jets escape with a point in a loss to the Golden Knights.

Illegal Curve Hockey Show: Saturday Podcast. You can watch the replay or download the podcast from our show on Saturday which was two hours of mostly Jets talk covering our reflections on the game against the Coyotes. Strength of the Jets schedule to start the season. Who comes out of the lineup when Nikolaj Ehlers is ready to return? Consistency from the third and fourth lines of Winnipeg. Previewing the Jets and Golden Knights game. Looking ahead to the Moose & Wild weekend series. Guests included Jesse Pollock (Bardown) and play-by-play voice Daniel Fink (Manitoba Moose).

Illegal Curve: Moose earn a split courtesy of a solid 4-1 win over Wild as special teams come through. Get the full 411 from yesterday’s contest including a look at the lines, some notable game facts, post-game media avails and what comes next.