Note: The Jets practiced out at the IcePlex on Saturday as they prepare to face the Stars tomorrow night in Dallas to kick off three games on the road. We also learned all the goal songs that will be played when various players score this season. The team is using today as a travel day and will not have any media availability. They’ll be back on the ice on Monday for morning skate.

Note II: The Moose looked like they were absolutely rolling yesterday in their home opener against the IceHogs leading 3-0 after 40 minutes. In that time 2021 1st rounder Chaz Lucius, who was making his pro debut, scored his first AHL goal and showed off his creativity as you can see here and here. Jets 2020 2nd rounder Daniel Torgersson also picked up where he left off last season as he ripped this shot home. The home side blew a 3-0 lead but looked like they won it late off a Ville Heinola shot which appeared to go in and out of the net but the goal was not confirmed by the refs which led to an OT that Rockford won. The re-match goes this afternoon at 2 PM.

Note III: Second straight 4-1 win for the Winnipeg Ice as they take their game last evening against the Cougars in Prince George. The local WHL club improve to 7-1-0 on the season. Next up they face the Royals in Victoria on Tuesday.

Winnipeg Sun: Players cite ‘night-and-day’ difference in coaching this season. I guess that’s because the inference would be if it wasn’t the coaches then it would be…..the players. 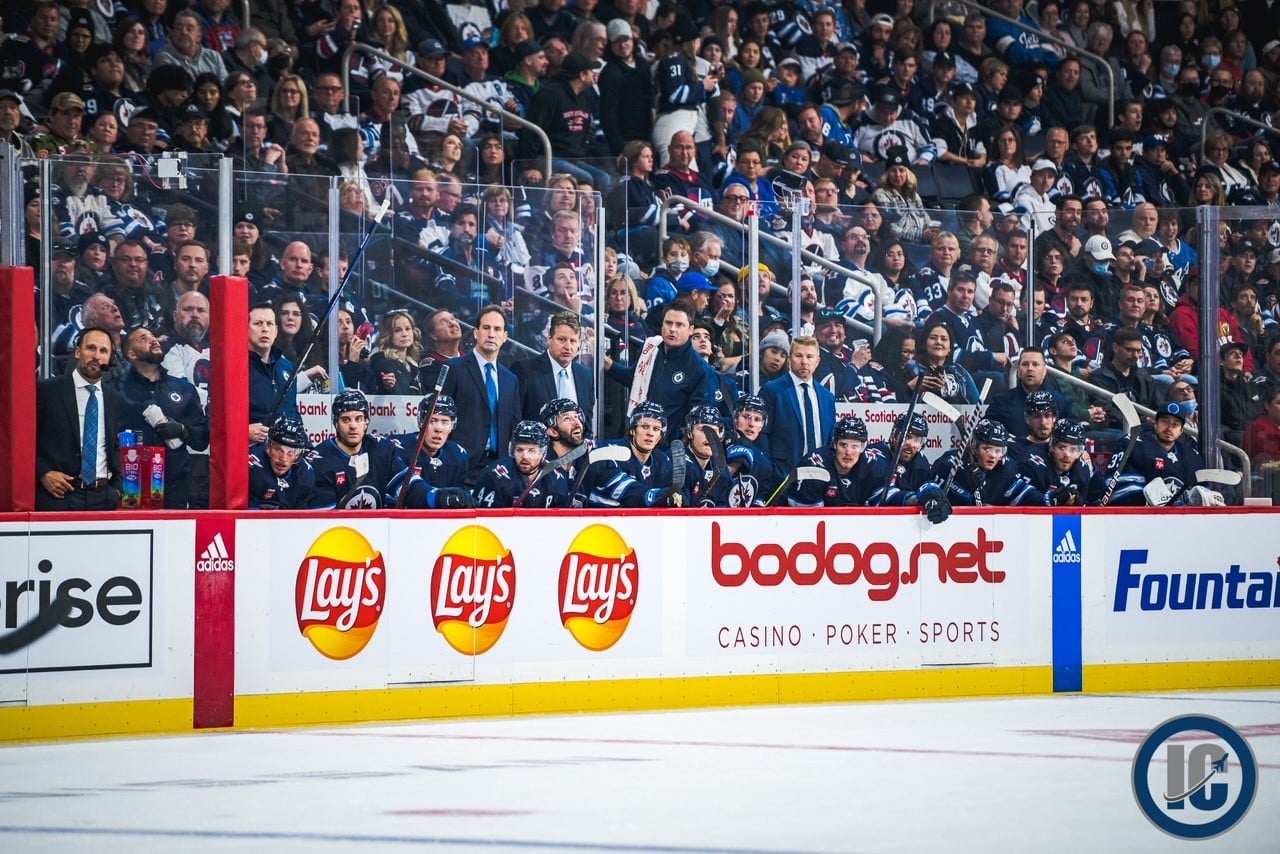 Winnipeg Sun: COVID leaves Jets ship without its captain. Scott Arniel does seem perfectly in tune with his head coach so there doesn’t appear to be any fall off between the two.

Winnipeg Free Press: Jets’ Bowness on shelf until Wednesday, at least. (Paywall). Tough news for the Jets bench boss as he will miss the opportunity to go up against his former club who are already 2-0-0 to start the season.

Sportsnet: Looking at why the Jets and Flames decided not to elect a captain. On this edition of To The Point. the HNIC panel discuss Jake Sanderson’s performance in his NHL debut, Ilya Samsonov taking over the primary goaltending duties for the Leafs and why Calgary and Winnipeg have opted not to select a captain this year.

Illegal Curve Hockey: Saturday Podast. On yesterday’s show we discussed: the Jets/Rangers home opener. Performance of the forward lines. Play of Connor Hellebuyck. Jets over/under for the season. Depth of the Manitoba Moose. We also spoke with voice of the Jets Dan Roberson and Mike Heika of DallasStars.com to give us insight into the next opponent of Winnipeg.

Illegal Curve: IceHogs complete “controversial” season opener comeback defeating Moose 5-4 in overtime. Get the full 411 from yesterday’s contest including a look at the lines, some notable game facts, post-game media avails and what comes next.