Note: The Jets skid hit three games after last night’s disappointing 4-1 loss to the Leafs which included alternate captain Mark Scheifele being stapled to the Winnipeg bench for much of the 2nd period. The Jets will have the day today to rest and recover but they better have things figured out by Monday as the five-game homestand continues against an Oilers team they’ve gone 2-5-0 against so far this season.

Note II:  While things aren’t ideal for the parent club the AHL affiliate is flying with Manitoba having won their fifth straight game on Saturday afternoon courtesy of a 3-0 dominating win by the Moose.  It was a milestone game for Eric Comrie who became the all-time franchise leader in wins. It was also another great performance by Jets 2020 1st rounder Cole Perfetti who had a goal and two primary assists (here & here) which gives him 11 points (4G 7A) in his last five games.  They are scheduled to practice today.

Sportsnet: Scheifele’s response to benching will help determine how far his Jets go. No doubt it will be important to see how 55 responds on Monday, Wednesday and down the stretch.

Winnipeg Sun: Scheifele rides the pine as Jets crash against Leafs.  Tongues were certainly wagging and lots of twitter ink was spilled when it was noticed that 55 wasn’t on PP1 or PP2 and then not taking his regular shift with Kyle Connor and Blake Wheeler which, after his last shift which ended at 6:59 of the 2nd, extended the entirety of the middle frame.

Yahoo: Joe Thornton begins heated new rivalry with Jets’ Nikolaj Ehlers.  I tried to joke on twitter that despite the height/weight disparity Jumbo Joe doesn’t want any part of the feisty Dane  Which in classic twitter fashion resulted in folks telling me that Thornton woulda cleaned Ehlers clock.  Regardless I followed that tweet up with one saying this is my new favourite rivalry and the article gives you some background on the feud. 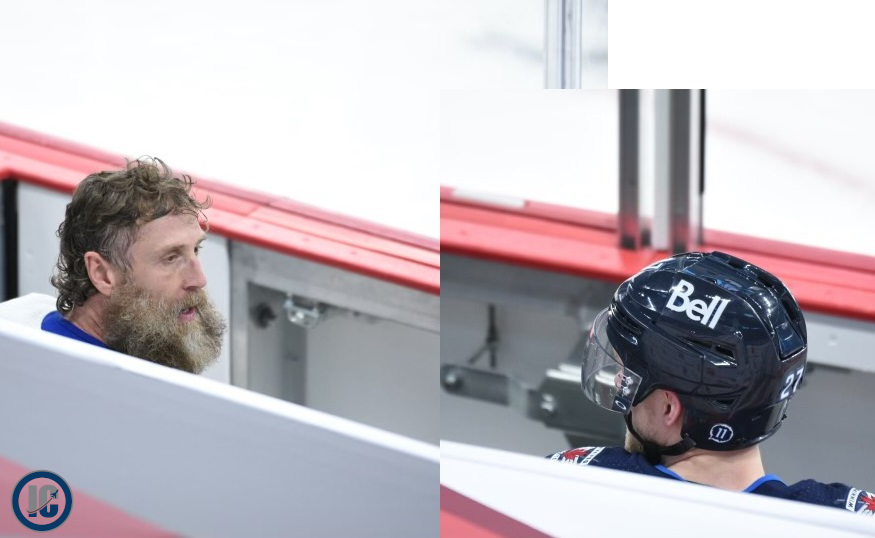 Toronto Star: Leafs sweep the Jets and breathe a little easier atop the North Division.  “So you’re telling me there’s a chance”. That line from Dumb and Dumber applied to the Jets chances of catching the Leafs for top spot in the North Division BEFORE this two-game mini series but now that Toronto has an eight point edge to go it seems unlikely Winnipeg (even with a game in hand) will be able to get close to the top.

Toronto Sun: Leafs getting into post-season gear with solid road win in Winnipeg.  The short series between the 1st and 2nd place teams in the North sure had the feel of a playoff series with lots of hits, post-whistle scrums and a heightened level of emotion.

Sportsnet: Thornton shows he still has a lot to give in win against Jets. The Hockey Night in Canada panel discuss the Maple Leafs beating the Jets, the Flames getting a big win over the Canadiens and much more.

TSN: Spark from Thornton, Spezza, physical play from Sandin give Maple Leafs edge on Jets. Joe Thornton and Jason Spezza provided the experience against the Jets and TSN Hockey analyst Dave Poulin breaks down how they were able to make an impact in the victory and discusses Rasmus Sandin’s overall effort against Winnipeg, including his physicality.

Topics: Jets lose first two games of five-game homestand, Are the Jets being pushed around by the Toronto Maple Leafs/Are the Jets tough enough heading into the playoffs, The impact of Adam Lowry’s injury and potential absence, Does Paul Maurice need to use Paul Stastny at centre if Lowry is out