Note:  The Jets are back in business today after taking a day off on Wednesday although they did make a couple of transactions off the roster and one between the taxi squad and their AHL affiliate.  They are scheduled to practice today at 11 AM CT as they get ready to face the Canucks in the fourth game of this seven game homestand.  Be sure to check back for the Practice Report for all the latest news.

Note II:  After a day off from training camp the Moose resuming skating today out at the IcePlex although they will have one addition (that we know about) and one subtraction as Jets 2020 1st rounder Cole Perfetti got moved up to the taxi squad with CJ Suess heading back to Manitoba. Update:  In addition to Suess there will be seven new faces at Moose camp today.

The Athletic Winnipeg: Limited minutes, big-time production: Nik Ehlers has emerged as the Jets’ top skater despite a secondary role. (Paywall).  As I tweeted during the Oilers game when Ehlers was creating time and space for himself and his teammates for the umpteenth time “I already thought his contract was a steal by the Jets but his play this year is making it look like grand theft in the first degree.” Murat with a look at the impact of number 27.

Winnipeg Sun:  Jets have nice problem in figuring out where to play Dubois, with offence already on fire.  In addition to this topic Ted also wrote about the Jets defensive depth, not-so-hot Hellebuyck, Lowry’s on fire and Ehlers doing fine.

Winnipeg Sun: Jets’ second line operating among the NHL’s elite. It certainly will give the Jets bench boss a lot to chew on as he tries to figure out how to add a number one centre to his top six. 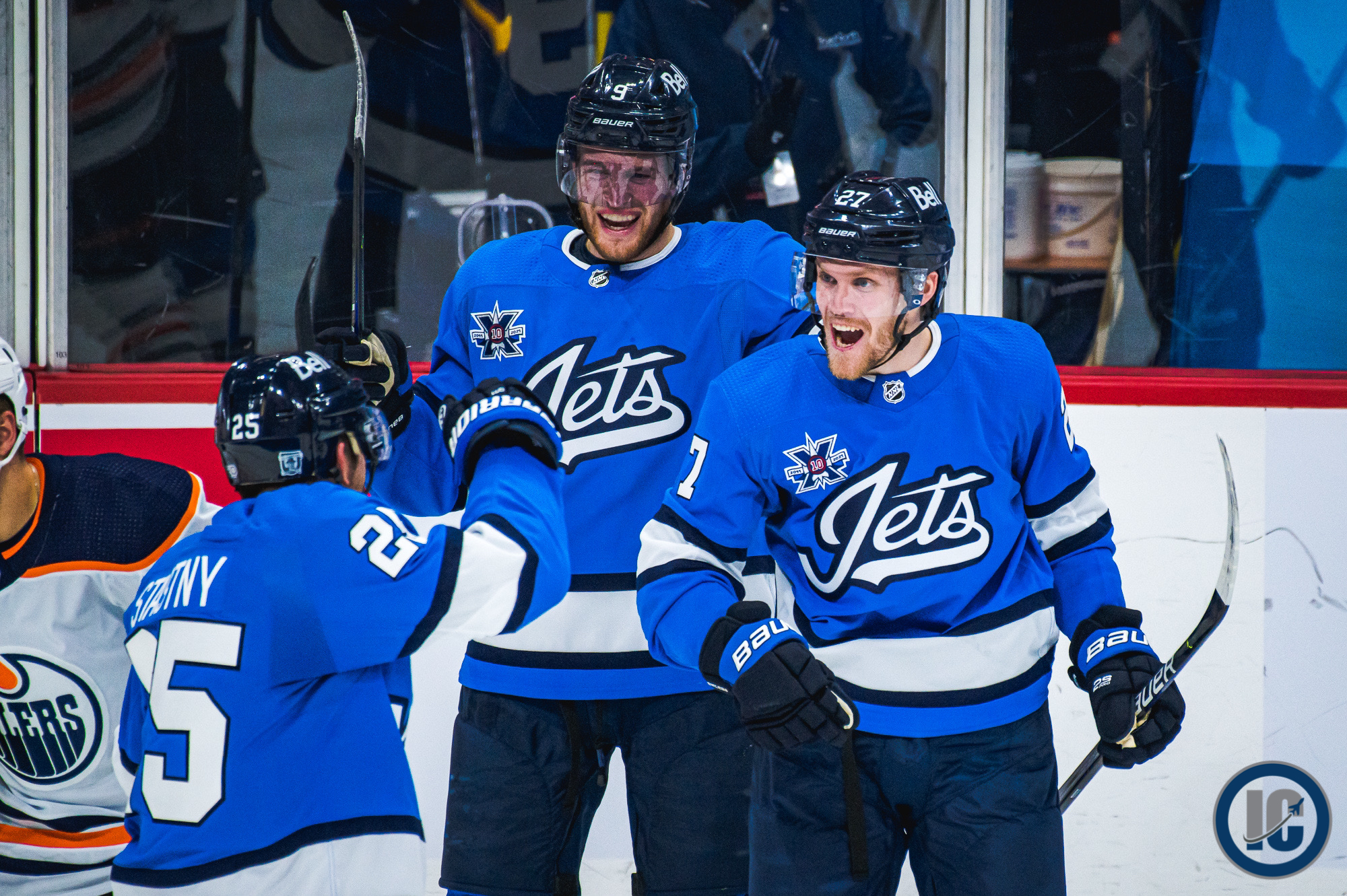 Winnipeg Sun:  Laine, Dubois stuck in limbo as Jets, Jackets fight red tape.  The delay seems to be playing out favourably for Winnipeg as they see Andrew Copp absolutely flourishing on the “second line”.  But as Paul writes it is unusual post-trade not to see the player on their new teams fairly quickly.

Winnipeg Free Press:  Jets off to encouraging start. (Paywall).  Adding points to the standings points early in the season will go a long way considering how tight things are likely to be in the All-Canadian division.

Global News:  Creating a crowd out of thin air: the Winnipeg Jets’ arena ‘sweetener’.  For those curious about all that “crowd noise” inside Bell MTS Place wonder no more.

NHL.com: Laine will be coached by Tortorella same as Dubois with Blue Jackets. One thing about John Tortorella is he doesn’t hide who he is. Love him or hate him he seems to be consistent in that regard.

EyeCandyAir: Stages of creation of Winnipeg Jets goalie Connor Hellebuyck’s 2021 Reverse Retro mask. It is quite the painstaking process as attention to detail is so critical and Steve Nash and the folks at eyecandyair give you some insight into the process with this condensed video.

TSN 1290 Winnipeg: Jets forward depth is a good problem to have. Tim Campbell of NHL.com joined Andrew Paterson and Rick Ralph on the Afternoon Ride. They discussed the continued fallout from the Laine-Dubois trade, the success of the Jets forward group and where Pierre Luc Dubois might fit in the lineup.

Winnipeg Free Press: Chisholm thrown into the fray. (Paywall).  With all the focus on the prospect Dmen like Heinola and Samberg one player who you need to keep your eyes peeled for is Jets 2018 5th rounder.  Of course I qualify my comment because he will need some time to marinate in the AHL but just remember the name.